Box Office Top 3: 'Avengers' Sizes Up Its Own Record 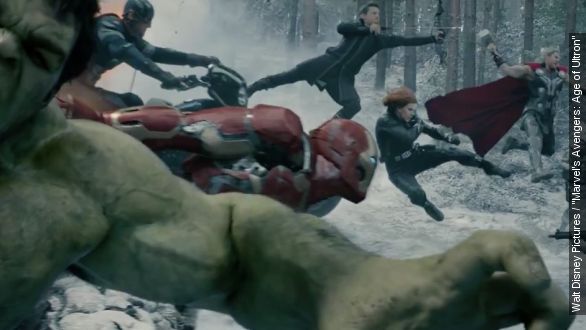 SMS
Box Office Top 3: 'Avengers' Sizes Up Its Own Record
By Jamal Andress
By Jamal Andress
May 10, 2015
"Avengers: Age of Ultron" takes the No. 1 spot this weekend, bringing in an estimated $77 million and putting the domestic total at $312 million.
SHOW TRANSCRIPT

In their second weekend, the Avengers continue to break records and dominate the box office while Reese Witherspoon suffers her second most embarrassing moment with police.

"Do you know my name, sir?" Witherspoon says in a police video.

"Marvel's Avengers: Age of Ultron" takes the No. 1 spot this weekend, bringing in an estimated $77 million. That puts the domestic total at $312 million and the worldwide total just below $875 million.

As expected, the records just keep piling up for Marvel's latest.

But the "Avengers" sequel does stand a chance at finishing first in the worldwide total. The original Avengers finished up its run at the box office with $1.5 billion, "Age of Ultron" is more than halfway to that total, and it hasn't opened in China or Japan yet.

To give you an idea of what kind of sales may be waiting in China, "Furious 7," which hit a billion dollars last month, made more than $370 million in Chinese theaters alone — about $30 million more than "Furious 7" has made in domestic theaters so far.

Now we unfortunately move to No. 2. "Hot Pursuit" takes the No. 2 spot this week bringing in an estimated $13.3 million in ticket sales and seemingly just as many bad reviews.

"She sounded like a lamb being sacrificed throughout the entire movie! A murdered lamb," Jeremy Jahns said of Sofia Vergara's role in "Hot Pursuit."

"I don't think I laughed once," Deadline's Pete Hammond said.

"This is one of most terrible films I have seen in recent memory. Kristian, I'm getting mad!" Mark Ellis said.

What makes this attempt at a comedy even worse is that we've seen it before — except way better.

So, if you're going to do the straight-laced-cop-and-zany-partner buddy movie, do it right.

The nail to "Hot Pursuit"'s coffin will most likely come next week, when "Pitch Perfect 2" a much better, funnier movie will likely steal the target audience.

As for next week, the post-apocalyptic, adrenaline-filled, "lovely day" you've been waiting for.