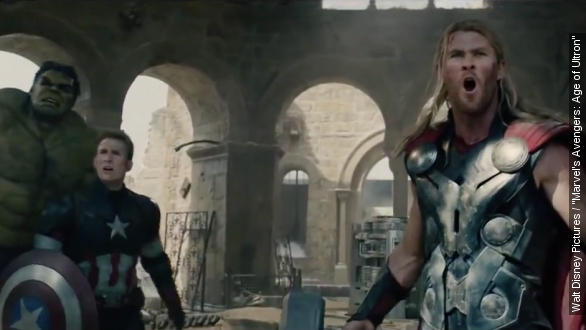 So, full disclosure… I was... excited about this weekend but that does not mean I won’t give a fair and thorough take on "Avengers: Age of Ultron."

We will get to the quality of Joss Whedon’s second Avengers in a second, but we begin with just how astoundingly well the movie has done at the box office — to the surprise of no one. (Video via TIME)

The $187 million marks the second highest opening weekend of any movie in box office history behind, you guessed it, the first "Avengers" movie, which made an even more remarkable $207 million. Oh, and if you’re wondering, Marvel can also lay claim to the third movie on that list, "Iron Man 3."

But back to the task at hand, Ultron and company have also predictably been a hit overseas where after two weekends the film has made $439 million, putting the Avengers worldwide total more than halfway to a billion dollars.

But even Marvel’s box office behemoth took one on the chin from boxing’s fight of the century. The drop off from Friday night moviegoers to Saturday was bigger than usual and many credit that dent to the Money Mayweather and Pac-Man Pacquiao fight.

But overall “Avengers: Age of Ultron” is nothing if not an enormous box office success. As for the quality of the Avengers 2, it was great – but the sequel is never as good as the original.

IGN's Jim Vejvoda says, "Realistically, it's simply impossible for 'Avengers: Age of Ultron' to re-capture the magic of seeing Earth’s mightiest heroes assembled on screen for the first time."

YouTube's Jeremy Jahns adds, “It’s a really hard thing the Avengers are going to have to overcome is the fact that 'The Avengers' happened, we saw it happen, and half the greatness of it happening was that it happened."

That being said, “Age of Ultron” is not far behind. I do have one small complaint though. The X-Men Quicksilver was a million times better than this guy.

Like every other movie, "Age of Adaline" took a big hit this weekend, only bringing in $6.2 million. That’s less than half the ticket sales of its opening weekend.

And at No. 3, Fast and Furious finally slows down, bringing in an estimated $6.1 million, a 65 percent drop from last weekend’s total. But it’s now the fourth-highest grossing film in box office history.