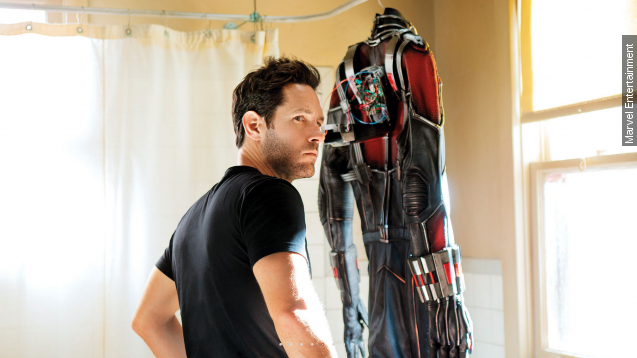 It was a battle of miniature-sized heroes at the box office this weekend, and Marvel's "Ant-Man" knocked our favorite minions off their first-place throne.

"Ant-Man" grossed an estimated $58 million domestically in its opening weekend, marking the 12th consecutive No. 1 opening for Marvel — but the little yellow guys trailed close behind. "Minions" brought in $50 million in its second weekend.

And even though "Ant-Man" didn't have as big of an opening weekend as other Marvel films based on lesser-known characters — like "Guardians of the Galaxy" ($94 million) — the insect superhero has largely won fans over.

"One of my favorite superhero films of the year, if not all time. This is a great flick," Schmoes Know’s Mark Ellis says.

"This is unlike any Marvel movie we've seen before," Collider's John Campea says.

"I walked out of this movie thinking I could like it far more than I thought I could possibly like 'Ant-Man,'" says YouTube's Jeremy Jahns.

And based on the good things we're hearing, the film could have a strong second weekend at the box office.

Finally, Amy Schumer and Bill Hader delivered spot-on comedic performances, per usual, in "Trainwreck." The Judd Apatow directed rom-com earned a better-than-projected $30.2 million, making it his second best opening — only behind "Knocked Up."

"Between this and 'Spy,' I think these are the two best comedies of the summer. Very easily," says one commentator from What the Flick?!.

And what would a 2015 box office story be without mentioning another record broken by "Jurassic World"?

This weekend, the dino flick passed the $600 million mark at the domestic box office, becoming only the fourth movie in history to do so. It also reached that mark the fastest, beating out "Avatar"'s 47-day record by over a week earlier.

Up next week — the Jake Gyllenhaal boxing drama "Southpaw" debuts, and some are already calling it Gyllenhaal's standout performance.