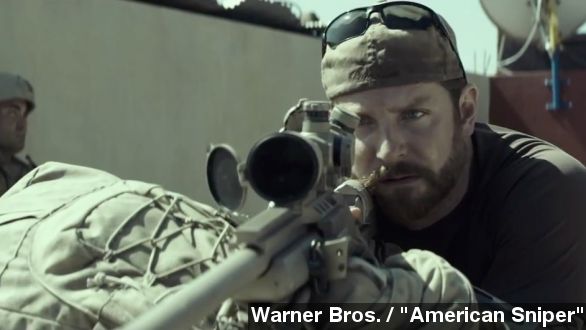 "American Sniper" technically premiered Christmas weekend but finally opened nationwide Friday, taking the No. 1 spot for this weekend and for this month by a landslide and bringing in an estimated $90 million.

When it comes to movie openings, January is traditionally a weaker month. In May, the top 10 biggest debut weekends are all above $100 million, whereas January's previous record holder, "Ride Along," was sitting just above $41 million.

Which is what makes American Sniper's $90 million weekend all the more impressive. Not only does it double "Ride Along's" open but it's also the second highest debut for an R-rated film behind only "The Matrix: Reloaded."

"American Sniper" is also one of the few films to combine serious box office numbers with critical success. It's nominated for six Academy Awards, including Best Actor and Best Picture.

Coming in at No. 2, Kevin Hart tries to re-create the magic from 2014's big January release "Ride Along" with "The Wedding Ringer," bringing in an estimated $21 million almost breaking even on the first three days of release.

"The Wedding Ringer" finds itself stuck between "Hitch" and "I Love You, Man" but unfortunately wasn't reviewed nearly as favorably as either of those movies.

But sometimes it's not about having a thought provoking message or intricate character arc. Sometimes watching the grandmother catch on fire at Sunday dinner is enough.

IGN's Max Nicholson said, "The key to enjoying the wedding ringer is to turn off your brain the moment you enter the theater."

"I was dreading it not being funny at all and it actually ends up working pretty well," said the schmoes from Schmoes Know.

And finally in at No. 3, the bear beloved by children since 1958 has a new movie, and it's doing quite well at the box office. It brought in an estimated $19 million and rounding out the top three.

But it's doing even better with critics, Paddington has a 98% rating on Rotten Tomatoes and an 87% user score.

With such an iconic character that has touched so many, British film critic Mark Kermode points out finally seeing the film was a big relief. (Video via Abbey Home Media)

"What a relief, what a relief to see something like Paddington and within the first 10 minutes you relax, you go, 'It's fine, we're in safe hands.' ... The jokes are laugh-out-loud funny all the way through. You consistently laugh. I stopped counting."

Another good sign: Paddington's creator, Michael Bond, is also pleased with the film.

He told the New York Times, "Paddington has been part of my life for 58 years and it was like handing over a child in a sense. ... I think it’s very good on all sorts of levels. It’s got funny moments, and moments of drawing-room comedy, everything really."

As for next week, Johnny Depp takes on yet another bizarre, whimsical role.