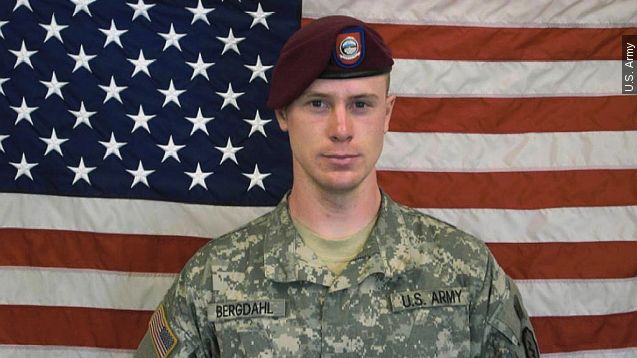 SMS
Bowe Bergdahl's Desertion Charges Referred To Court-Martial
By Katie Link
By Katie Link
December 14, 2015
Army Sgt. Bowe Bergdahl will face a court-martial on charges of desertion and endangering troops after leaving his post in Afghanistan in 2009.
SHOW TRANSCRIPT

U.S. Army Forces Command announced Monday that Sgt. Bowe Bergdahl's trial on charges of desertion and endangering troops will be referred to a general court-martial.

Bergdahl left his outpost in Afghanistan on June 30, 2009, and was captured by the Taliban. Throughout his nearly five years in captivity, troops were forced to abandon their original missions to search for him. (Video via ABC)

Bergdahl was released after President Obama traded him for five Taliban prisoners at Guantanamo Bay in 2014.

Back in March, the Army charged Bergdahl with one count of desertion — punishable by five years in prison — and one count of endangering the troops sent to search for him. The latter charge comes with a maximum of a life sentence.

But recently, the Army lawyer who presided over a preliminary hearing in his case recommended that Bergdahl neither face jail time nor a punitive discharge. The decision came after hearing testimony that he was not a Taliban sympathizer and no troops died specifically while searching for him. (Video via CNN and The Guardian)

As of now, the date of an arraignment hearing in the court-martial case hasn't been set.