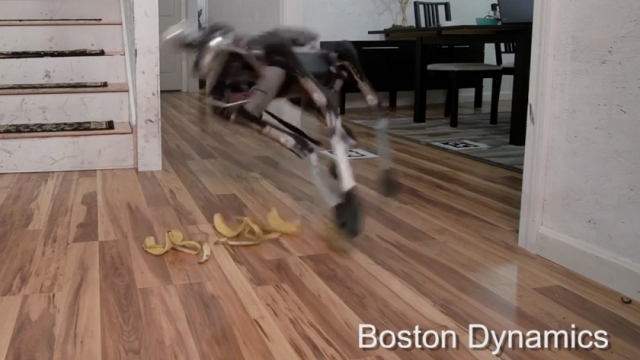 The company known for making advanced robots and then abusing them is back at it again.

On Thursday, Boston Dynamics released a video of SpotMini, a smaller version of its dog-like robots. Even though this is by no means the company's first time sharing some of the tests the robots undergo, a couple things stand out about this debut.

For one, the robot bullying is a little more hands-off this go around. Here's SpotMini slipping on a handful of strategically placed banana peels.

Aside from Boston Dynamics' more cartoonish approach to being mean, the other thing that stands out in this debut is that most of the video is in a domestic setting. The company seems to be trying to pitch the potential usefulness of SpotMini in your own home.

Looks like the company is still working on SpotMini's obedience training, though. Judging by the look of fear on this man trying to grab a drink from SpotMini, it might be wise to start stockpiling those banana peels, just in case.

This video includes an image from Getty Images and clips from Boston Dynamics. Music provided courtesy of APM Music.