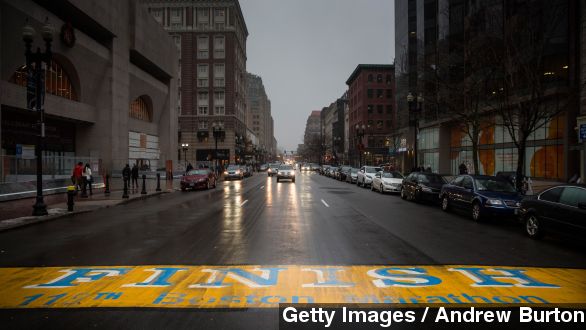 It's been almost two years since homemade bombs ripped apart the Boston Marathon in a terrorist attack that killed three spectators. Wednesday, one of the suspects finally had his day in court.

On trial is Dzhokhar Tsarnaev, who's been charged with 30 crimes, 17 of which could result in the death penalty. His older brother Tamerlan, the other suspect in the attack, died in a confrontation with Boston police days after the bombing.

So it's the first day of trial, and Tsarnaev's lawyer kicked off the show with a pretty stunning admission: It was him, no question.

“Clark admitted the 'inexcusable and senseless acts' were carried out by the 19-year-old and his brother Tamerlan," MSNBC reported.

So... trial's over, right? Well, no. Although Tsarnaev will certainly be convicted of something, we don't yet know what the punishment will be.

“Ultimately there’s really only one question before the jury: Whether this 20-year-old should be sentenced to life in prison or death," NBC's legal analyst Cynthia McFadden explained.

To avoid the death penalty, the defense will try to prove that Dzhokhar was little more than a stooge, following the lead of Tamerlan, the real terrorist mastermind. (Video via BBC)

PBS Newshour summarized the defense's argument: “He was drawn to a path of violence by his older brother Tamerlan, a special kind of influence, dictated by age, culture, and sheer force of personality."

It's a classic criminal defense tactic — always pin as much blame as possible on the person who is dead. But it's a tough argument to make, especially to a jury composed of Bostonians.

The trial has reminded citizens of the terror that gripped the city for weeks after the bombing, including days when no one was allowed outside their homes. (Video via ABC)

And the prosecution will be fighting hard for the death penalty. U.S. Attorney William Weinreb said that Dzhokhar believed he was a "solider in a holy war" who had "murder in his heart."

The trial is expected to continue into April, with a verdict to be delivered in the early summer.

This video includes images from Getty Images and Russavia / CC BY 2.0.