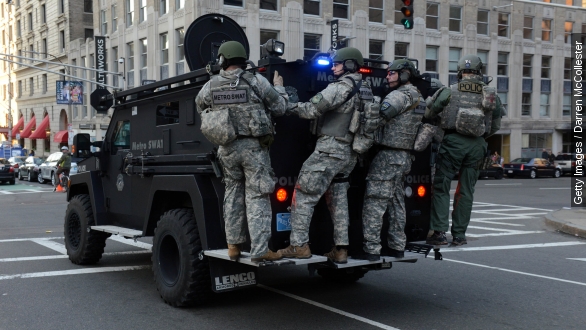 Anyone watching coverage of the Boston Marathon bombings could see the chaos on Boylston Street after two bombs ripped through the annual race — killing three, and injuring more than 260 others.

According to a new report from the state of Massachusetts, that chaos also extended to law enforcement responding to the bombings and searching for suspects.

"I hunched down and I saw the bullets flying through the front door. I was like, 'I've got to get out of here,'" Watertown resident Kayla Dipaolo told WFTX.

One situation in focus was the initial shootout with the Tsarnaev brothers on Dexter and Laurel Streets. The report says the officers who first responded did so properly, while others who showed up later began firing without clearly identifying the target.

After that firefight, in which bombing suspect Tamerlan Tsarnaev was killed, an officer fired upon an unmarked police pickup truck that was incorrectly reported stolen. Two law enforcement officials were inside but neither were injured.

Finally, when officers found the other bombing suspect, Dzhokhar Tsarnaev, hiding in a boat in a residential area, an unnamed officer fired at the suspect. Other officers followed suit thinking Tsarnaev had a gun when he didn't, causing a dangerous crossfire situation with law enforcement.

The bombings happened on a Monday and by Friday, there were more than 2,500 law enforcement officers in Watertown, which could've contributed to the confusion. But one security analyst told WBZ-TV there was no precedent for an attack like this.

"We've never experienced this in American law enforcement before. Now, we're looking at a new dynamic, a new dimension of what police officers need to be able to respond to," WBZ-TV security analyst Ed Davis said.

The report praises emergency responders for quickly tending to those injured at the scene of the explosions and also offers suggestions for future reference, like enhanced security on the marathon course and better weapons training for officers.