'Bookkeeper Of Auschwitz' Gets Trial Date In Germany 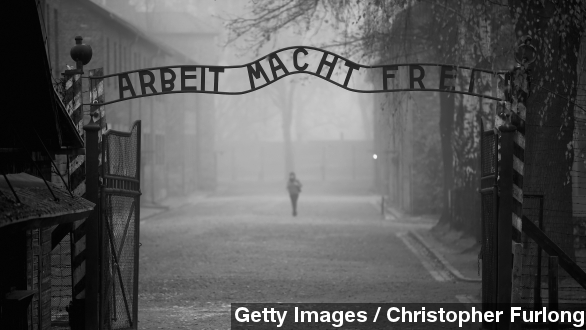 SMS
'Bookkeeper Of Auschwitz' Gets Trial Date In Germany
By Matt Picht
By Matt Picht
February 2, 2015
Oskar Groening, a 93-year-old who worked as a Nazi prison guard at Auschwitz, will stand trial in Germany on April 21.
SHOW TRANSCRIPT

A German court has finally settled on the trial date for Oskar Groening, the 93-year-old man who allegedly worked as a Nazi prison guard at Auschwitz.

Groening will stand trial April 21 in the German city of Lueneburg. He's facing 300,000 counts of accessory to murder.

Also known as the "bookkeeper of Auschwitz," Groening allegedly helped count banknotes and sort possessions taken from the camp's prisoners. The formal charges stem from his role in processing 425,000 people who arrived at Auschwitz between May and July of 1944.

Groening hasn't denied his time at Auschwitz, but he has maintained his legal innocence. In 2005, he told Der Spiegel, "I believe that I was not an active perpetrator; I don't believe that I am guilty."

And until recently, Germany's legal system agreed with him. According to The Guardian, prosecutors dropped a similar case against Groening in 1985. The outlet points out German prosecutors have focused on finding evidence of specific crimes, rather than general participation in the Holocaust.

That all changed in 2011, when John Demjanjuk was convicted of accessory to murder for working at the Sobibor death camp, despite a lack of specific charges or eyewitness testimony. Demjanjuk died in 2012 in the middle of an appeal.

That investigation turned up only two cases deemed fit to bring to trial. Groening's is one, while the other involves 93-year-old Hilde Michnia, a former SS officer who allegedly worked at Auschwitz. Michnia has denied playing any role in the massacre.

An estimated 1.1 million people, mostly Jewish, were killed at Auschwitz-Birkenau alone during the Holocaust. One historian calculated that of the 6,500 SS guards who worked at Auschwitz and survived the war, only 49 have even been convicted.