Bonobo 'Peeps' Could Shed Light On Evolution Of Language 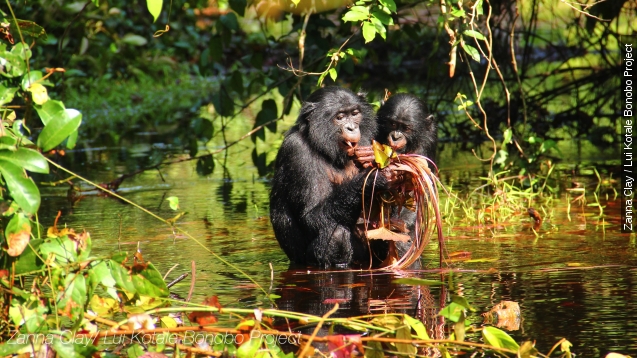 That little squeak might not sound like much to you, but to a bonobo mother, it carries a lot of meaning.

Exactly how it does that is a question researchers are asking, and the answer could shed more light on the evolution of language.

It all comes down to a concept called functional flexibility, one of language's basic building blocks.

The researchers define it as "an individual's capacity to produce signals that are detached from a predetermined function to express different psychological and affective states in a range of situations."

For example, when a baby cries, we don't need a whole lot of other information to know it's probably unhappy. (Video via YouTube / Aaron Lauper)

But other baby noises may communicate different meanings in different situations, despite sounding the same.

Now, bonobos are putting into question the idea that functional flexibility is exclusively human.

Whereas most animals make noises that have one fixed function, like a squirrel's alarm call, bonobos make hard- to-distinguish "peeps" that can carry different meanings. (Video via YouTube / Jed Deadlock)

The researchers say "bonobo peep production may represent a somewhat intermediate stage between functionally fixed ... and functionally flexible signals, as seen in most human vocalisations."

And that's significant, because evolution-wise, bonobos are as close a relative as we've got — having diverged from a common ancestor some 4 to 7 million years ago. (Video via Applied Art)

The findings could show that some of the foundations of language — a fundamentally human concept — could predate humanity itself. (Video via University of Southern California)

The researchers say for more conclusive evidence, more tests need to be done to see how effectively bonobos can discriminate between positive and neutral peeps. You can find their research in the journal PeerJ. (Video via Iowa Primate Learning Sanctuary)