Bonded By Visuals: ISIS And The Media 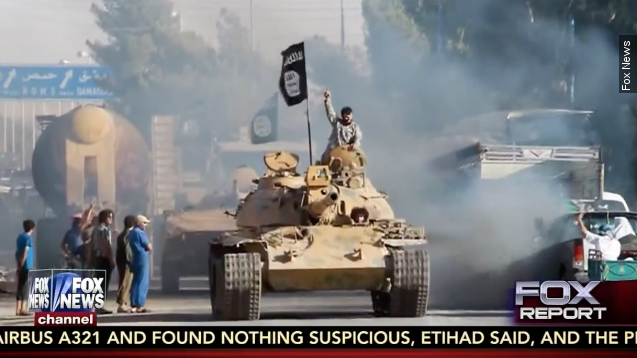 SMS
Bonded By Visuals: ISIS And The Media
By Jake Godin
By Jake Godin
May 14, 2015
According to a recent Politico report, the Obama administration is asking media companies to stop using ISIS footage.
SHOW TRANSCRIPT

The reason? Officials say it's inaccurate.

One Pentagon spokesman said a more accurate image would be "one Toyota speeding down the road by itself at night with its headlights off."

Or footage from coalition airstrikes. (Video via U.S. Central Command)

The media isn't alone. Politicians are using propaganda videos, too.

"In the Middle East, radical terrorists are on the march," says U.S. Sen. Tom Cotton in a campaign ad.

"I'll keep all the options on the table in order to defeat the evil forces of radical Islam," says presidential candidate Mike Huckabee in another campaign ad.

So is there any way to stop the flow of ISIS propaganda from appearing on screens? (Video via Fox News, CBS, CNN, MSNBC)

"We live in a tremendously visual age, and we see this all the time, if you can't have images to illustrate your journalism be it video images or photo images, you hit a bit of a dead wall," Agence France-Presse editor-in-chief Phil Chetwynd told Vice.