Bond Franchise Returns With A 'Spectre' Of Mystery 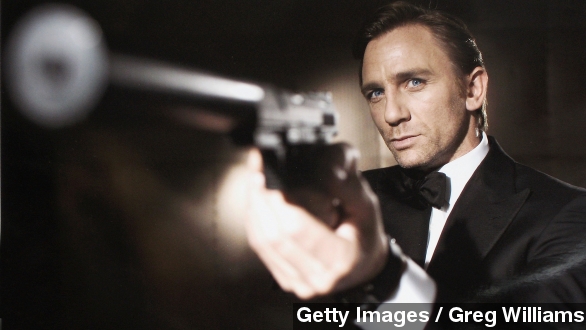 SMS
Bond Franchise Returns With A 'Spectre' Of Mystery
By Bram Sable-Smith
By Bram Sable-Smith
December 4, 2014
A launch event unveiled the cast, car and title of the new James Bond film, but some mysteries remain about the 24th installment in the franchise.
SHOW TRANSCRIPT

Hold onto your martini glasses. Grab your bow ties. Bond is back.

At a launch event Thursday in London, the name of the 24th installment in the Bond series was revealed. (Video via Flicks and the City)

Bond fans will recognize the acronym for the "Special Executive for Counter-intelligence, Terrorism, Revenge and Extortion." (Video via MGM / "Thunderball")

And considering the recent buzz surrounding a Bond announcement, coupled with recent bad news for the movie's studio, some, like the BBC, were surprised the film's title remained a secret so long.

"Sony Pictures, recently the victim of a cyberattack where confidential information was leaked, will be glad this was one thing that remained secret until today," BBC entertainment correspondent Lizo Mzimba said.

But the title was not all that was revealed Thursday. The new Bond car by Aston Martin was also unveiled.

As was the film's cast, which, in addition to Daniel Craig, includes Academy Award winner Christoph Waltz.

That's sparked rumors that Waltz could play the role of the evil genius head of SPECTRE, Ernst Stavro Blofeld. (Video via Eon Productions)

And while those rumors were unsubstantiated by the film's director Sam Mendes, Bond alum Sir Roger Moore fueled the flames with a tweet, saying, "So Blofeld is back!"

The classic Blofeld was the villain that launched a thousand parodies, including, of course, the Austin Powers nemesis Dr. Evil, right down to the cat scratching. (Video via New Line Cinema / "Austin Powers: The Spy Who Shagged Me")

The Austin Powers films themselves caught some attention earlier this week, thanks to a newly surfaced interview that Bond blog MI6 conducted with Daniel Craig in 2012.

In the interview, Craig attributed the seriousness of his Bond films as a response to the Mike Meyers parodies, saying, "I am a huge Mike Myers fan, so don't get me wrong – but he kind of f***** us; made it impossible to do the gags."