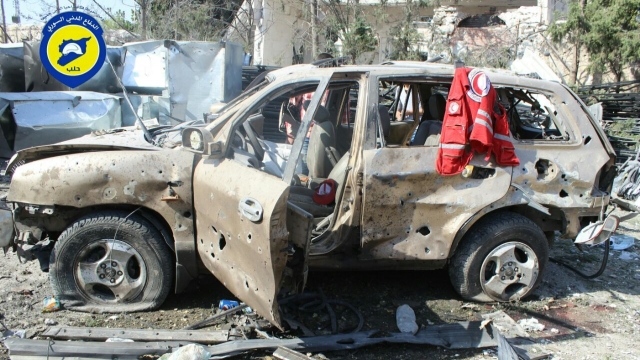 SMS
Double-Tap Tactic Destroys Aid Convoy, Kills Dozens In Syria
By Jake Godin
By Jake Godin
September 20, 2016
The bombing received wide condemnation. Although no party has been declared responsible so far, the U.S. and activists claim it was Russia or Syria.
SHOW TRANSCRIPT

That's what the U.S. government is saying, though the Russian Ministry of Defense denies it. Instead, they say it was rebels that must've attacked the convoy or started a fire.

According to the International Federation of Red Cross and Red Crescent Societies, the aid convoy was hit as it was being unloaded in Orem, just west of Aleppo. Eighteen of the 31 trucks were destroyed along with the SARC-Orem warehouse. The director of the SARC-Orem branch, Omar Barakat, was also killed in the strike.

Soon after Syria's regime declared that a weeklong cease-fire had ended, Aleppo and its countryside fell under intense bombardment.

Activist video uploaded during the bombardment showed what was reportedly a "double-tap" strike against the convoy. Essentially, after the first strike hit, a second strike was conducted to hit any rescuers that arrived at the scene.

Video uploaded by the Syrian Civil Defense forces, also known as the White Helmets, showed the site of the convoy bombing along with firefighting efforts in Aleppo's Sukkari district.

The Aleppo Media Center showed video of the convoy the morning after the attack. Burnt-out trucks and aid scattered around the area could be seen. Overnight, the media center had uploaded a video showing victims of bombings in Aleppo city. At least 38 people were reportedly killed in and around Aleppo overnight.

In response to the bombing, the United Nations said it was temporarily halting all convoy movement in Syria.