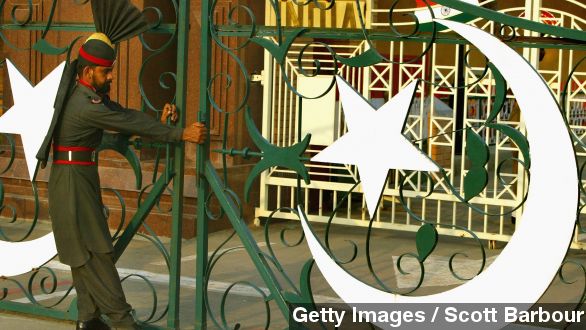 A suicide bombing in Pakistan has killed dozens and injured hundreds near the country's only road crossing into India.

The blast came on the Wagah, Pakistan side of the crossing in a parking lot when people were returning to their cars after the close of a parade. (Video via Geo TV)

The border closing parade, known as The Beating Retreat ceremony, occurs daily and involves strictly coordinated movements by Pakistani guards on one side and Indian guards on the other. The festivities draw thousands of people each day. (Video via PBS)

According to The Times of India, at least 52 people were killed and 200 injured after the blast. A border guard told the outlet if the bomb had gone off closer to the ceremony, many more people would have died.

India's recently elected Prime Minister Narendra Modi condemned the attack as a "dastardly act of terrorism" while a Pakistani opposition leader said he was "shocked and saddened" by the bombing.

Initial reports pegged the attacks on Pakistan's Jundullah militant group, which is closely associated with the Pakistani Taliban. Though an Al Jazeera correspondent later said that was unlikely. (Video via Internet Archive)

A separate Pakistani Taliban splinter group has now taken credit and said it would be releasing a video of the incident soon.

Al Jazeera notes while multiple groups have claimed responsibility for the attack, all of them have said it was done in retaliation for Pakistan's continued efforts to remove militants from its northern Waziristan region.

According to Voice of America, the latest operation in Waziristan came last week when the Pakistani military killed 33 suspected terrorists with airstrikes. A total of 1,100 militants have reportedly been killed in the region since June.