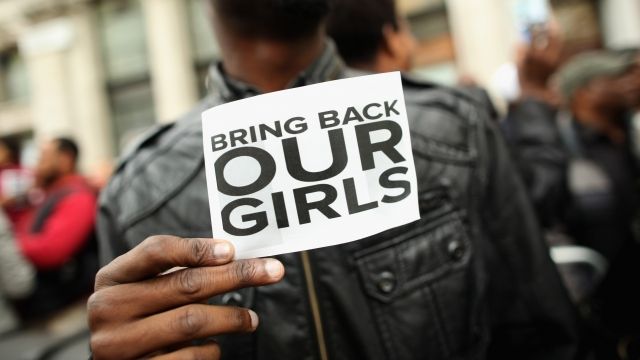 SMS
Boko Haram Released 21 Of The Schoolgirls It Kidnapped 2 Years Ago
By Katherine Biek
By Katherine Biek
October 13, 2016
It's the first major release since more than 200 girls were kidnapped in 2014.
SHOW TRANSCRIPT

The extremist group Boko Haram released 21 Nigerian schoolgirls Thursday. The girls are now in the custody of the country's domestic intelligence agency.

Militants kidnapped 276 girls from a school in 2014. More than 50 were able to initially escape, and many of the other girls have been shown in the background of several Boko Haram videos since then.

SEE MORE: Terrorists Might Be Why We Can't Get Rid Of Polio

The mass kidnapping sparked a global social media campaign along with the hashtag #BringBackOurGirls.

Prior to Thursday's release, Boko Haram had freed just one other kidnapped schoolgirl. That happened in May of this year.

This latest release is the result of negotiations between militants and Nigeria's government. It's unclear if Boko Haram gained anything because of the release. The Associated Press says detained Boko Haram leaders were given in exchange, but an anonymous source told CNN no such exchange occurred.