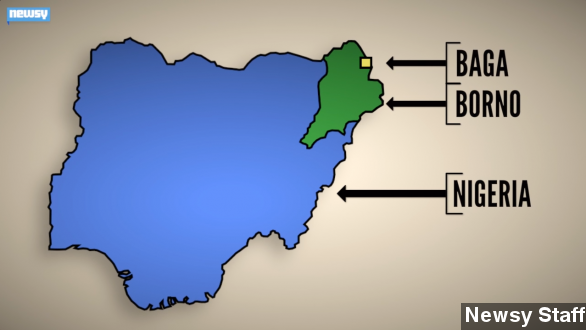 The Nigerian terrorist group Boko Haram successfully overran a town and military outpost in northwestern Nigeria this week, and local officials say the death toll could reach as high as 2,000.

Al Jazeera's Ahmed Idriss reported, "Basically they attacked the village over the weekend and killed lots of people, some are talking about hundreds of people killed. ... Then they came back on Wednesday and started killing again."

After taking over a military base near the town of Baga Saturday, Boko Haram fighters rampaged through 16 surrounding towns and villages Tuesday and Wednesday, burning homes and slaughtering civilians.

There's no official death toll, but local lawmakers estimate as many as 1,000 or 2,000 people are dead after the attacks. Other observers place the death toll in the hundreds rather than the thousands.

The town has borne the brunt of these clashes before; in 2013, the BBC reported 185 people had been killed in the region due to fighting between government troops and Boko Haram.

At the time, groups like Human Rights Watch were concerned about the military's heavy-handed tactics, releasing satellite photos showing thousands of homes destroyed during the fighting.

Now, Nigerian troops are being criticized for their inability to combat Boko Haram. Despite several widely-touted gains the military claims to have made against the group, most observers say Boko Haram is better equipped and more motivated than the government's forces.

Nigeria and its neighbors have been battling Boko Haram since it emerged in 2009. The Council on Foreign Relations estimates over 15,000 people have been killed in the conflict so far.