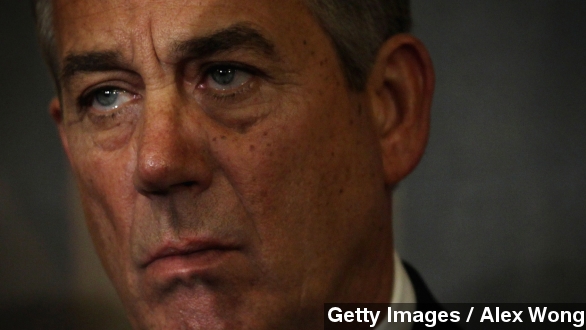 In the latest government shutdown fight on Capitol Hill, House Speaker John Boehner is sticking to his guns.

"And you're prepared to let that happen?"

"Certainly. The House has acted. We've done our job."

When Congress reconvenes next week, it will have just four voting days to fund the Department of Homeland Security.

The agency runs out of money Feb. 27, after which it will have to furlough administrative workers and force the majority of its employees to work without pay.

The Republican-controlled House has already passed a bill to fund the department, but it includes provisions that would undo President Obama's executive action on immigration. Democratic opposition to the bill has effectively killed it in the Senate.

Senate Majority Leader Mitch McConnell told reporters Tuesday: "It's clear we can't go forward in the Senate, unless you all have heard something I haven't. And so the next move, obviously, is up to the House."

With no compromise in sight and the funding deadline looming, the conversation in D.C., has shifted from "Can we fund Homeland Security?," to "Who's taking the fall when the agency shuts down?"

Boehner has been adamant that Democrats will be responsible if the department isn't funded.

He said Wednesday, "Why don't you go ask the Senate Democrats when they're going to get off their ass and do something other than vote no?"

But Democrats argue Republicans are at fault for tying immigration to the department's funding in the first place.

And opinion is divided in the GOP on whether it's worth pushing Homeland Security funding over the brink.

House GOP campaign committee chair Greg Walden told Politico: "I don't think we win that debate in the press. ... The American people expect us to come here and get our job done ... especially in the area of national security."

According to a 2013 contingency plan, in the event of a shutdown, 85 percent of Homeland Security workers would work without pay until the agency is funded, after which they would receive back pay. The department's head, Jeh Johnson, also estimates at least 30,000 employees would be furloughed.