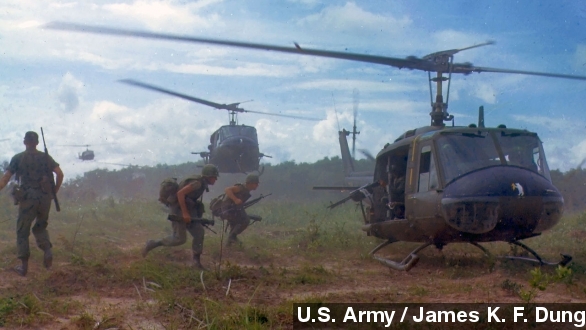 SMS
Body Counts Didn't Mean Success In Vietnam, Won't With ISIS
By Matt Picht
By Matt Picht
January 23, 2015
Ever since Vietnam, the Pentagon hasn't used body counts as a measure of progress. It's an aversion that continues in the fight against ISIS.
SHOW TRANSCRIPT

For Americans watching at home, the Vietnam War was defined in part by the nightly body counts. Regular estimates from the U.S. military about the number of enemy units killed or captured gave onlookers a sense that the war's progress could be measured.

The difference? This time, the military's not publicly keeping score.

"It is a measurement, but I don't think it is the measurement. I mean, I was in a war with a lot of body counts every day. And we lost that war."

Defense Secretary Chuck Hagel refused to confirm the 6,000 casualties figure during a press conference, saying the Pentagon used other metrics, like damage to the group's recruitment ability, supply lines and leadership, to track progress against ISIS.

For Vietnam veterans like Hagel — and the journalists who covered them — body counts bring up bad memories of the last time the U.S. really used kills to imply progress.

By the end of the Vietnam War, the U.S. claimed to have killed over 950,000 enemy soldiers. Pentagon officials later admitted that figure was inflated by as much as one-third.

And of course, the high death toll didn't stop North Vietnamese forces from successfully bogging down the U.S. and forcing it to withdraw.

And that's part of the reason why the U.S. military has since been hesitant to publicly release those numbers.

"I don't think there's ever been, ever, in the history of warfare, been a successful count of dead."

And at the start of the Iraq War in 2003, Gen. Tommy Franks told reporters, "We don't do body counts."

That turned out not to be quite accurate; while the Pentagon doesn't publish an official death toll, it does keep a private record of wartime casualties. We learned that from WikiLeaks in 2010.