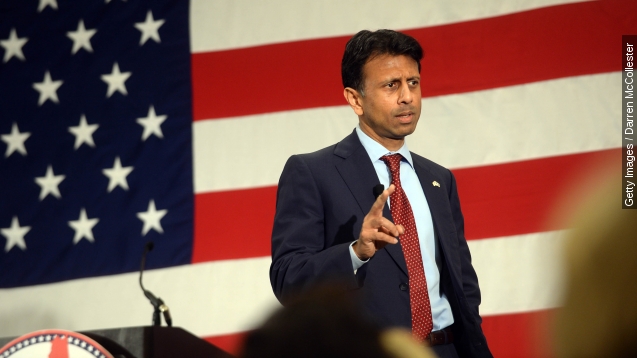 SMS
Bobby Jindal Announces Candidacy, Promises Daughter A Puppy
By Kate Grumke
By Kate Grumke
June 24, 2015
Louisiana Gov. Bobby Jindal has his work cut out for him as he enters a large and growing 2016 GOP field.
SHOW TRANSCRIPT

The announcement came in the form of videos like this one of him and his wife telling his children he is running.

"OK, if we move into the White House, you can have a puppy," said Jindal.

Jindal, at one time, was considered an upcoming star in the GOP. In a party looking for diversity, his parents are immigrants from India, although Jindal rejects the term Indian-American and has called for the end of "hyphenated Americans." He was assistant secretary of health and human services under George W. Bush. He was also elected to Congress in 2005 and served until 2008 when he then became the governor of Louisiana. (Video via American Conservative Union)

But lately, Jindal's popularity has been dwindling. He has been polling dead last among 2016 Republican hopefuls, and his approval ratings are even slipping in his home state.

Still, he has been acting like a candidate for a while now. He's already been traveling to early primary states and giving interviews.

Now, Jindal has his work cut out for him. He enters a field of more than 10 major GOP presidential candidates.