Blue Bell Is Recalling All Of Its Products 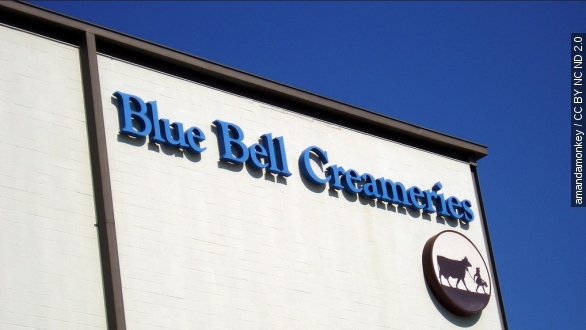 After two cartons of ice cream were found contaminated with listeria, Blue Bell Creameries is voluntarily recalling all of its products.

"We are heartbroken over this situation. ... Our entire history has been dedicated to making the very best in high quality ice cream that we possibly could and we're committed to fixing the problem," Blue Bell CEO Paul Kruse said in a video statement.

This is just the latest step Blue Bell has taken since the bacteria was found in its products earlier this year. So far, contaminated products have been linked to five patients in Kansas and three in Texas.

In March, Blue Bell issued its first recall in its 108-year history. It included chocolate, strawberry and vanilla ice cream cups produced at its Oklahoma plant.

Then on April 7th, Blue Bell expanded that recall to include additional ice cream products produced at that plant that tested positive for listeria. (Video via KXAS)

Blue Bell, which distributes ice cream to about half of the U.S., announced the decision to voluntarily recall all of its products was made after listeria was found in several half gallons of Chocolate Chip Cookie Dough Ice Cream produced on two separate dates in March.

According to the Centers for Disease Control and Prevention, on average 1,600 people become infected with listeria every year and about one in five die, making it the third leading cause of death from food poisoning.

Listeria was linked to those tainted cantaloupes grown on a Colorado farm back in 2011, that sickened almost 150 people across the country. Thirty-three of them died. (Video via ABC)

Blue Bell isn't sure how listeria got into its facilities, but the company is now implementing what it calls a "test and hold" system in which Blue Bell will continue to produce ice cream but those products won't hit any supermarket shelves before they've been tested and shown listeria is not present.