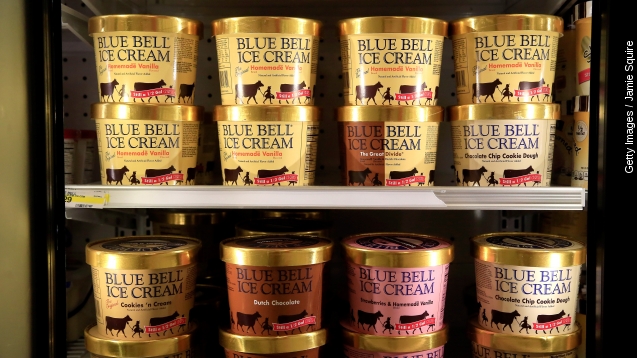 SMS
Blue Bell Ice Cream To Slowly Return To Stores After Recall
By Katherine Biek
By Katherine Biek
August 18, 2015
After pulling its products from stores in April due to a bacterial contamination, Blue Bell will ship ice cream to select locations soon.
SHOW TRANSCRIPT

Blue Bell recalled its ice cream products in April after they were found to contain the harmful bacteria listeria. Ten people were hospitalized and three others died after eating the ice cream.

In July, KTVT reported the company began testing its ice cream at its Alabama plant.

It was able to do these test runs after reaching an agreement with the Alabama Department of Public Health, which said Blue Bell would test production before shipping ice cream to consumers. (Video via WFAA)

Now part of the reason Blue Bell is shipping its products only to cities in Texas and Alabama beginning Aug. 31 is because only its Alabama plant is currently producing ice cream. The Texas and Oklahoma plants are still closed. (Video via Blue Bell Creameries)

"It's kind of like trying to fill an Olympic-sized swimming pool with a garden hose. It can be done. It's just gonna take some time," Blue Bell's vice president of sales and marketing, Ricky Dickson said.

Blue Bell created a five-phase plan to get its products on the market in 15 states. But there's no time frame when those stages will be completed.