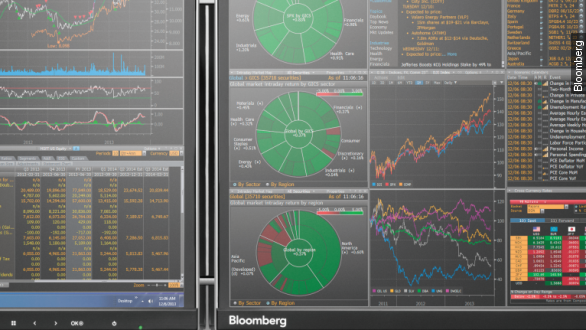 By Jake Godin
April 17, 2015
Bloomberg's market data terminals went down Friday morning, causing problems for traders in Europe and Asia who were trying to work at peak hours.
SHOW TRANSCRIPT

Something peculiar happened on Friday to Bloomberg's lauded trading terminals — they went down. (Video via Bloomberg)

Traders worldwide suddenly found themselves at a loss Friday morning. The Bloomberg terminals they relied on so heavily for market data, news and chatting with other traders were suddenly down. Poof. Connection lost.

This, of course, caused some panic in the trading world. The outage took place in the early morning for those in North America, but folks in Europe and Asia were left blind to the market at peak hours.

When asked by The New York Times about problems created from the outage, one anonymous trader from Europe said: "Problems? Simple: No prices. Nothing. So you can't do anything at all."

Another trader told The Wall Street Journal it was "very concerning how much financial markets rely on [Bloomberg] for the information necessary to conduct their business."

Then, of course, there were folks who vented on Twitter with fellow traders. Bloomberg terminals host an intermarket chat service some argue is more popular than the market data.

The outage had some serious implications in the United Kingdom, too. With the terminals down, the U.K.'s Debt Management Office was forced to postpone a short-term Treasury bill auction that was supposed to raise £3bn, or about $4.48 billion.

Bloomberg terminals, also called Bloomberg Professional, cost somewhere in the ballpark of $20,000 annually. According to Bloomberg, the company has more than 320,000 subscribers to the service as well.

Bloomberg's only explanation for the outage was the vague reference to an "internal network issue." The company reported the service was fully up and running by about mid-morning. (Video via Bloomberg)