Blind People Can Read Braille In Real Time With Smartwatch 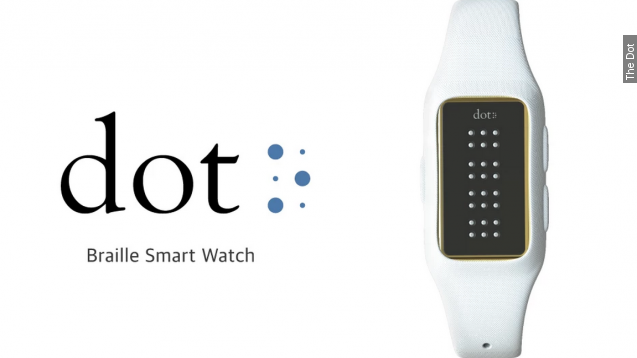 SMS
Blind People Can Read Braille In Real Time With Smartwatch
By Ben Lawson
By Ben Lawson
August 4, 2015
Portable electronic devices that display Braille can be expensive, but one Korean company has created an affordable option that fits on your wrist.
SHOW TRANSCRIPT

Smart devices are becoming an increasingly important part of our daily lives, but they don't serve one group of people as well as others: the blind.

One Korean startup is trying to solve that with The Dot, the first smartwatch that can display Braille. The device uses movable pins to display four Braille characters at once. Users can connect The Dot to any device via Bluetooth to read texts and get other data from apps.

Other devices that show Braille text updating in real time can cost thousands of dollars and aren't very portable. (Video via YouTube / HumanWareTechnologie)

But The Dot's CEO told Tech in Asia his company's smartwatch will only run about $300 when it debuts in the U.S. in December. (Video via Arirang)

It's not without its limitations, though. A spokesperson for the American Foundation for the Blind told Fast Company: "You could read [individual] letters fine. But most words are longer than four characters, so you'd get part of the word, then more."

She said that could make reading on the device a challenging process, but she was still excited by The Dot, even if it could only be used for simple things like displaying the time.