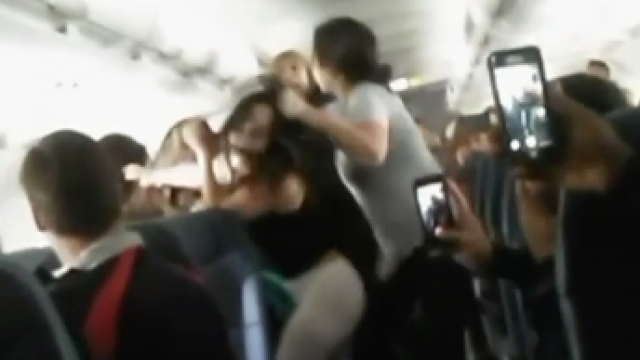 SMS
Blaring Boom Box Spurs Punches and Hair-Pulling On Airplane
By Cody LaGrow
By Cody LaGrow
March 10, 2016
Loud music (and perhaps alcohol) pushed a group of women to engage in an all-out brawl on a Spirit Airlines flight from Baltimore to Los Angeles.
SHOW TRANSCRIPT

Attention, passengers! Please make sure your seats are in an upright position, seat belts are securely fastened, and all carry-on items are stowed underneath the seat in front of you. Because if not, you could get caught in the middle of this aviation altercation.

Passengers on this Spirit Airlines flight from Baltimore to Los Angeles went head-to-head in a fight over a boom box blaring loud music. There is running, hair-pulling, and punches are flying.

"They were throwing serious punches. The ladies, they were serious. To be honest with you, I felt like alcohol was definitely involved in the fight," described eyewitness Emerson Silva.

The two allegedly intoxicated passengers were playing their music a little too loudly when several others asked them to turn it down. When they refused, well, that was the day the music died and the Spirit smackdown was born.

Police later boarded the plane and escorted the passengers off. No one was seriously injured or arrested, though it looks like these ladies have a different idea of what going to the slammer really means.