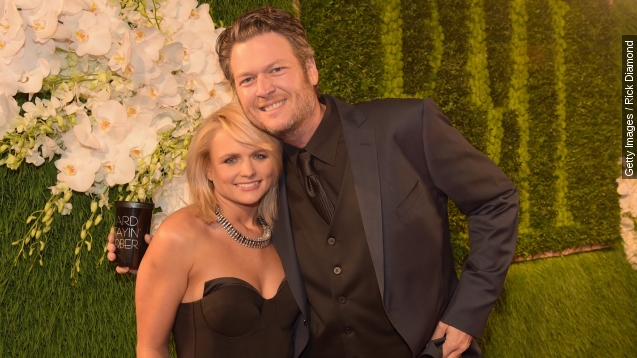 One of country music's favorite couples — Blake Shelton and Miranda Lambert — are divorcing.

The announcement was first published by TMZ but later picked up by a number of other media outlets.

Lambert and Shelton, who celebrated their fourth wedding anniversary in May, reportedly have the financial side of things already sorted out — a potentially problematic situation made easier because of a prenup.

The couple’s romance first started on stage at the 2005 CMT special "100 Greatest Duets," where Shelton and Lambert were paired to sing "You're the Reason God Made Oklahoma."

Shelton, who was married to another woman at the time, told VH1 in a "Behind the Music" special, "Looking back on that, I was falling in love with her right there on stage."

In 2011, they got married after a year-long engagement. Shelton told Us Weekly, “This is going to be my last marriage, and hopefully hers too.”

And at first, things were great. But as their fame grew, the couple became subjects of tabloid rumors — even to the point where they joked about it on social media.

In 2013, Shelton tweeted at Lambert, saying, "I just read in a tabloid that our marriage is falling apart!!!"

That award show marked the final time we saw them together as the rockstar couple they had become – though it should be noted they didn't walk the carpet together.

Sources tell TMZ, which first reported the news, that Shelton will get the Oklahoma ranch while Lambert will take the Nashville house.