Blackmail? Reading Between The Lines Of Hastert's Indictment 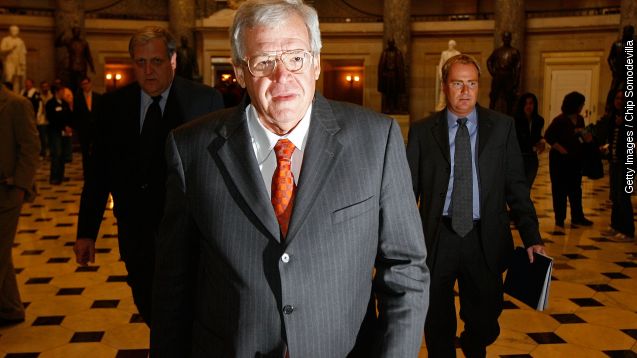 Dennis Hastert is in some trouble. We know that much.

Citing unnamed sources, the Los Angeles Times is now reporting Hastert tried to cover up sexual misconduct related to his time as a high school teacher and wrestling coach.

And according to NBC, Hastert had a sexual relationship with a male student and then paid him off to conceal the relationship.

And based off some of the headlines out there, your takeaway could be the former Republican House speaker was indicted for paying hush money.

By itself, that's not a crime. It's not illegal to pay someone to keep your secret. Best we can tell, the issue here wasn't the pay-up but the cover-up.

The feds accuse Hastert of illegally structuring cash withdrawals from the bank and then lying to the FBI when asked about it. (Video via The Universal Peace Federation)

The seven-page indictment details a series of alleged meetings between Hastert and someone referred to only as Individual A. Allegedly, Hastert agreed to pay Individual A $3.5 million "to compensate for and conceal his prior misconduct against Individual A." Though the indictment never uses the word, it sounds a lot like blackmail.

Which would suggest Hastert must have been pretty determined to keep whatever dirt Individual A had on him secret. Otherwise, why not fess up to authorities and get his blackmailer arrested? Blackmailing is, after all, a crime.

That's the route David Letterman took back in 2009 when a TV news producer tried blackmailing him for $2 million — threatening to expose Letterman's sexual relationships with female staffers. (Video via CBS / "Late Show with David Letterman")

Rather than paying off the guy, Letterman clued in the authorities and then admitted to everything on national TV.

"I had to tell them all the creepy things that I have done," Letterman told his audience in 2009.

Hastert's situation is more like Letterman's in reverse. It appears as though Individual A, the potential blackmailer, is the one cooperating with authorities.

"Likely the way they've written the indictment where it says 'Individual A' means 'Individual A' is likely to cooperate with the FBI at some point in the investigation. So I think there is more story to be told here," former House Intelligence Committee Chairman Mike Rogers told CNN.

If and when we'll get more of the story remains to be seen. Still no word from Hastert himself.