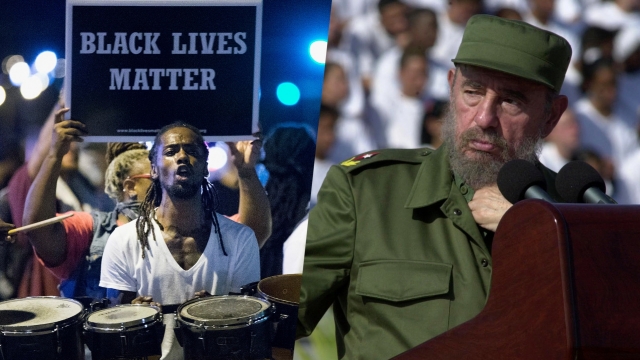 SMS
Black Lives Matter Defends Fidel Castro In Opinion Piece
By Ryan Biek
By Ryan Biek
November 28, 2016
The organization wrote, "We must push back against the rhetoric of the right and come to the defense of El Comandante."
SHOW TRANSCRIPT

In an opinion piece Sunday, the Black Lives Matter organization came "to the defense" of deceased Cuban dictator Fidel Castro.

The article praised Castro both for his ideology and for actions he took to protect members of the black community.

Some of those actions involved the U.S. For instance, the article referenced the aid Castro offered to Hurricane Katrina victims in 2005.

Many black Americans also saw a champion in Castro for his work of advocating against racism around the world.

In the 1980s, Castro deployed tens of thousands of Cuban troops in Angola to oppose South Africa's apartheid government.

Back in his home country, Castro abolished legal discrimination. He also worked to make every citizen literate years before black Americans were guaranteed the right to vote.

His rebels executed hundreds of opponents after taking power. And thousands of Cuban citizens were harassed, intimidated and jailed during Castro's autocratic rule.

Critics argue that by defending Castro, Black Lives Matter has contradicted one of the movement's apparent core values — that, as Martin Luther King Jr. said, "Injustice anywhere is a threat to justice everywhere."