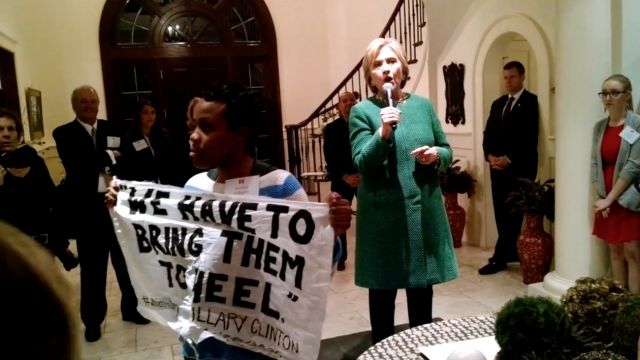 SMS
Black Lives Matter Activist Tells Clinton: 'I'm Not A Super-Predator'
By Jamal Andress
By Jamal Andress
February 25, 2016
The activist held up a sign that read, "We have to bring them to heel," referring to a comment Hillary Clinton made in 1996 about at-risk youth.
SHOW TRANSCRIPT

As the fight for the Democratic black vote continues, Hillary Clinton was confronted Wednesday by a Black Lives Matter activist at a late-night fundraiser.

"We have to bring them to heel?" Hillary Clinton said.

"I'm not a super-predator, Hillary Clinton. Can you apologize to black people for mass incarceration?" activist Ashley Williams asked.

The activist — Ashley Williams from Charlotte, North Carolina — held up a sign that read, "We have to bring them to heel," referring to a controversial statement Clinton made in 1996 about at-risk youth.

"They're not just gangs of kids anymore. They are often the kinds of kids that are called 'super-predators' — no conscience, no empathy. We can talk about why they ended up that way, but first we must bring them to heel," Clinton said.

Statements like this from Clinton are only part of a bigger issue for the presidential candidate and her apparent relationship with Black Lives Matter — it all comes down to mass incarceration.

You can trace the problem of mass incarceration to a number of things, but one of those is the Violent Crime Control and Law Enforcement Act signed by Bill Clinton and supported by Hillary Clinton.

"There is something wrong when a third of all black men face the prospect of prison during their lifetimes," Clinton said.

Hillary Clinton has addressed the Bill Clinton administration's role in mass incarceration before and has released plans for criminal justice reform.

And while Hillary Clinton does have plenty of support from blacks, this has been an ongoing issue for her with Black Lives Matter activists.

"You've offered a recognition that mass incarceration has not worked. ... You and your family have been in no uncertain way partially responsible for this, more than most." a Black Lives Matter activist said to Hillary Clinton.

The protester who interrupted Clinton at this latest fundraiser told the Huffington Post: "She called our boys 'super-predators' in '96. Then, she race-baited when running against Obama in '08. Now, she's a lifelong civil rights activist. I just want to know which Hillary is running for president: the one from '96, '08 or the new Hillary?"

#WhichHillary has been trending on Twitter since the incident. That said, CNN projections have Clinton ahead in South Carolina with black voters, 65 percent to Bernie's 28 percent. Many view this primary as the first real test for both candidates with black voters.