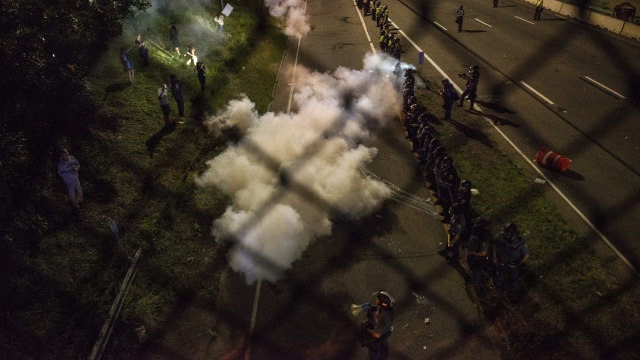 "Police. You're under arrest. Don't fight me," a police officer who came up behind McKesson can be heard saying.

"I'm under arrest, y'all," McKesson can be heard saying as he falls to the ground.

His arrest comes as thousands across the country protest the deaths of Philando Castile and Alton Sterling — two black men who died in police shootings last week.

In St. Paul, Minnesota, clashes between protesters and police led to at least 50 arrests after demonstrators threw bottles, fireworks and concrete at police officers.

Demonstrators shut down Interstate 94 in both directions. At least five officers were injured in the protest.

Police could be seen putting on gas masks and using pepper spray on protesters. According to the Minneapolis Star Tribune, officers also used tear gas and smoke bombs to break up the crowd.

Most of the protests were peaceful, but both protesters and officers are on edge after a demonstration in Dallas on Thursday ended when a sniper killed five police officers and injured several others.

Police made several arrests over the weekend during protests in cities outside Louisiana and Minnesota, including Chicago and Atlanta.