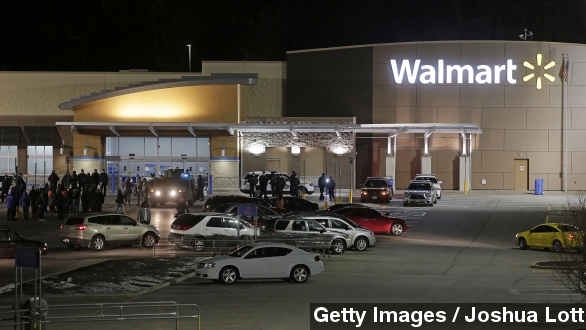 Starting late Thursday and moving into Black Friday, dozens of protesters carried their call to action inside the doors of area Wal-Marts and a few other stores. The Wal-Mart in Ferguson, Missouri remained permanently closed throughout the night according to ABC news. (Video via CBS)

The crowds also urged buyers to stage an economic boycott at the store.  Sales at some Wal-Marts were postponed temporarily.  Others stood vocal on social media inspiring #BlackOutFriday, #HandsUpDontSpend and #BrownFriday to spread the message.

According to several local outlets, police kept watch at Wal-Marts and a few asked the protesters to leave. But all report authorities made no immediate arrests and the protests remained civil.

Friday's Ferguson protests added insult to injury so to speak for Wal-Mart.  Its own workforce planned nationwide protests for Friday to call for higher wages.  Wal-Mart has not made any official comment as of Friday morning.