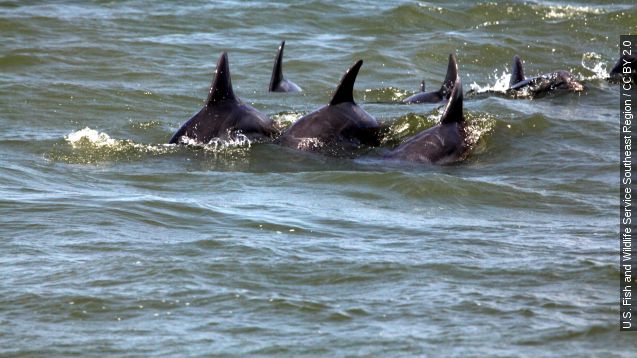 SMS
Black Death: BP Oil Spill Blamed For Dolphin Die-Off
By Jamal Andress
By Jamal Andress
May 21, 2015
A new study says there is a direct link between the biggest oil spill in history and mass dolphin deaths in the Gulf of Mexico.
SHOW TRANSCRIPT

"The progress continues, but that doesn't mean our job is done. BP is still here," says someone in a BP ad featuring the company's oil cleanup efforts in the Gulf of Mexico.

But many dolphins are not.

A 2013 study conducted by the National Oceanic and Atmospheric Administration says 95 percent of the more than 1,100 cetaceans — which includes dolphins, whales and porpoises — stranded by the oil spill have died. Scientists say the period between the BP oil spill and now is the Gulf of Mexico's longest ever die-off of marine mammals — especially bottlenose dolphins.

And while many say the BP oil spill was the main cause of these dolphin deaths, there was no study to say as much — until now. A new study, also conducted by NOAA, says there is a direct link to the biggest oil spill in history and the mass dolphin deaths.

In the first breeding season after the spill, the Gulf saw 10 times as many dead baby dolphins wash ashore than usual. This "unusual mortality event" has continued into 2014 with 87 percent of the casualties being bottlenose dolphins.

The study found a large amount of the dolphins who died in the Gulf of Mexico had adrenal, lung and liver lesions consistent with lung disease caused by inhaling oil fumes and exposure to oil chemicals. Researchers also compared the dolphins from the Gulf with dolphins from other areas isolated from the spill.

BP refutes the NOAA's findings, saying in a statement, "The data we have seen thus far, including the new study from NOAA, do not show that oil from the Deepwater Horizon accident caused an increase in dolphin mortality."

This NOAA report comes shortly after BP released its own report, which claims the Gulf is "rebounding" and that more than 90 percent of water samples from the Gulf show low oil content.

NOAA's findings are part of an ongoing investigation into the lasting effects of the BP oil spill, which BP says is the largest environmental assessment in history.