Black Captain America Debuts, But Is He Here To Stay? 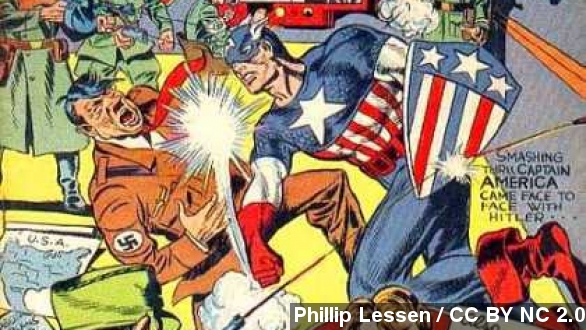 The first issue of "All-New Captain America" came out this week — and Marvel's catching praise for giving an African-American character the title role. But is it really that revolutionary of a step?

In this comic book series, Captain America loses his powers and hands over the role to his longtime buddy Sam Wilson, who movie fans might remember from the last Cap flick. (Video via Marvel Entertainment)

The announcement Wilson would take over Captain America came along with the news a new female character would be taking over as Thor.

So Marvel is clearly making an active decision to stray away from the stereotypical white male superhero. But that decision may not be as inventive as it's being made out to be.

Marvel has been diversifying for years. For a while, it had a Hispanic and African-American Spider-Man web-slinging around New York, and it also featured a same-sex marriage in "Astonishing X-Men."

So right now it seems the trend at Marvel is letting one of the new, more diverse characters take up the mantle of an existing popular hero.

And skeptics like former "Captain America and the Falcon" writer Christopher Priest told Los Angeles Times he isn't convinced of this being anything other than a quick sales stunt until the old Captain returns.

"Marvel's challenge is to deliver something so affirming and positive that the work overcomes that cynicism. I assure you, Black America will be watching: Does this have real depth, or is it just surfacey costume-switching?"

So it remains to be seen whether Marvel's latest switch-ups are just a temporary change of pace on an existing character or the forward-thinking steps they're made out to be.