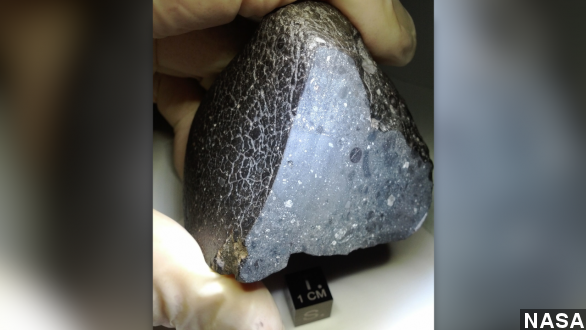 SMS
'Black Beauty' Meteorite Reveals Secrets Of Mars' Surface
By Nathan Giannini
By Nathan Giannini
February 2, 2015
The 4.4 billion-year-old meteorite is like nothing ever discovered on Earth and gives researchers insight into the makeup of the Red Planet's surface.
SHOW TRANSCRIPT

A new study claims a recently discovered meteorite is a chunk of Martian crust and is like nothing else ever discovered on Earth.

The meteorite, known as NWA 7034, weighs just 11 ounces. It was discovered in the Moroccan desert in 2011 and eventually sold to a collector in the U.S.

According to the study by researchers from Brown University and the University of New Mexico, the meteorite, known as "Black Beauty," is about 4.4 billion years old.

When researchers first examined the rock, its chemical makeup confirmed it was indeed from Mars, but it was completely different from any sample ever discovered before.

The majority of the samples from Mars' surface are made from cooled volcanic material. Black Beauty, however, is made up of small fragments of different rocks all welded together — known as a breccia rock.

The planet has more than 400,000 impact craters of at least 1 km in diameter. Impacts of that magnitude are known to cause those brecciated rocks, leading researchers to believe this rock would be characteristic of much of the Red Planet's surface.

A press release quotes lead author Kevin Cannon as saying, "If you went to Mars and picked up a chunk of crust, you'd expect it to be heavily beat up, battered, broken apart and put back together."

The study was published in the journal Icarus.

This video contains images from NASA, NASA/JPL-Caltech/Univ. of Arizona, NASA/JPL and NASA and The Hubble Heritage Team.