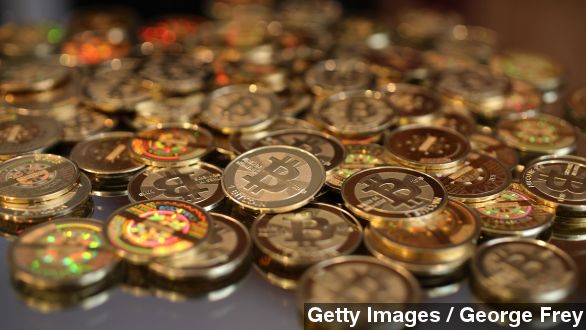 Bitcoin has had a tumultuous 2015, and we haven't even made it out of January yet. The cryptocurrency — once worth more than an ounce of gold per "coin" — has had an unforgiving slide over the past month.

The value dropped from $345 this time last month to $177 Thursday morning, the lowest price value bitcoin has seen since April of 2013. Some attribute this nonstop falling price point in the new year to bitcoin's latest security scandal.

Bitstamp, a bitcoin exchange based in the UK and one of the largest in the world, was hacked on Jan. 4. It lost 19,000 bitcoin or a little more than $5 million U.S.

Since the hack, Bitstamp has gotten its exchange back up and running. But for many investors, the lack of security with bitcoin has always been a cause for concern.

Bitcoin had this to say: "We are sorry for the troubles caused by this."

Protestor Kolin Burges: "I had 311 bitcoins in there. … It was worth about a three hundred thousand dollars, so it looks like that disappeared."

Mt. Gox is still the horror story attached to the bitcoin exchanges. It was handling 70 percent of the world's bitcoin transactions before closing down in April of 2014. It lost 850,000 bitcoins, amounting to more than $450 million.

Whatever the reason for the astounding drop in value since Jan. 1, the question is whether the cryptocurrency can save itself without a federal-reserve-type entity to step in.

To make matters worse, the value of the bitcoin is falling so rapidly, the powerful and expensive computers used to mine bitcoins are costing more than they're bringing in.

Leaving bitcoin miners in a catch-22, according to The Washington Post: "They have dollar debts that they need to pay back, and where else are they going to get the money? … They can't afford to keep mining, but they can't afford to stop mining, either."

Despite the drop in price, bitcoin is still head and shoulders above where it started. Bitcoin was worth less than a dollar back in 2010 and in January of 2013 was worth just $14 bucks.