Birthright Citizenship Is A No-Go For These GOP Candidates 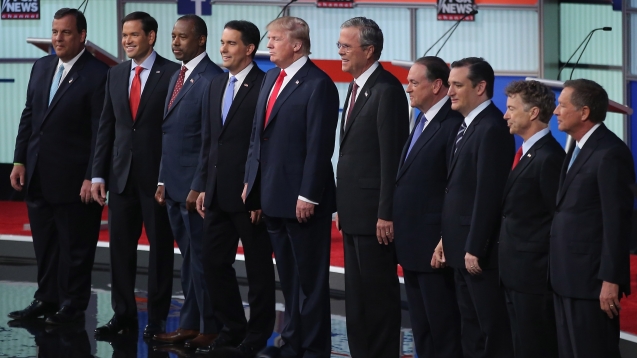 SMS
Birthright Citizenship Is A No-Go For These GOP Candidates
By Eugene Daniels
By Eugene Daniels
August 20, 2015
Immigration is a hot issue this election cycle, and GOP presidential candidates aren't shy about saying what they think of the 14th Amendment.
SHOW TRANSCRIPT

Some of these guys want to end birthright citizenship.

That means changing the 14th Amendment, which basically says: If you're born here, you are a citizen. Period.

"You want to get rid of birthright citizenship?" Chuck Todd of "Meet the Press" asked Donald Trump in an interview.

“You have to get rid of it. What they're doing, they're having a baby. And then all of a sudden, nobody knows ... the baby's here. You have no choice,” Trump answered.

"We should end birthright citizenship?" Wisconsin Gov. Scott Walker was asked by MSNBC.

"Yeah, it’s about enforcing the laws of this country. You enforce the laws, and I think it’s important to send a message that we’re going to enforce the laws no matter how people come here," he answered.

"Have your baby here. That baby becomes an American citizen; that incentivizes illegal immigration," Lindsey Graham told Fox News in 2010.

“All these things need to be re-examined in light of the current circumstances. While that may have made some sense at some point in our history, but right now, we need to relook at all that,” Chris Christie said in an interview with Laura Ingraham.

In 2010, Rand Paul told Right Wing News, “I don’t think the 14th Amendment was meant to apply to illegal aliens.”

They aren’t the only ones who want it gone. A bill was introduced just this year to get rid of birthright citizenship.

If we didn’t have the 14th Amendment, it could definitely narrow the GOP field.

Without it, neither Marco Rubio nor Bobby Jindal could run for president.