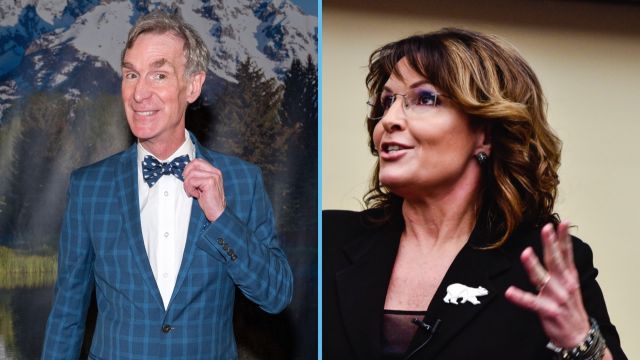 Sarah Palin is apparently not the biggest fan of Bill Nye — yes, the science guy. She tore into Nye for his stance on climate change during an event in Washington, D.C., on Thursday.

According to The Hill, Palin was at a premiere for an anti-climate-change film called "Climate Hustle" when she said: "Bill Nye is as much a scientist as I am. He's a kids' show actor. He's not a scientist."

Except Nye doesn't just play a science guy on TV. He has a degree in mechanical engineering and has worked as an engineer at Boeing, designed sundials for Mars rovers, taught at Cornell University and is an executive at the Planetary Society.

Nye, an outspoken proponent of climate change theory, appears in an interview in the film where he suggests investigating people and companies who get famous for doubting climate science.

A day before the premiere, Nye posted a video on Facebook criticizing Palin and the film's producer Marc Morano.

"People like Miss Palin, people like Mr. Morano ... these people have children, they have grandchildren, and so they're, right now, not doing anything about the quality of life for their progeny," Nye wrote on Facebook.

At the movie's premiere, Palin said, "If this is bogus, you know, what else are they trying to tell us and control us around?" She also suggested the science has become so political that people might begin to distrust scientists on other issues.

The film itself makes a lot of claims about climate change, including the idea that rising carbon dioxide emissions might be a good thing, though many peer-reviewed studies seem to suggest otherwise.