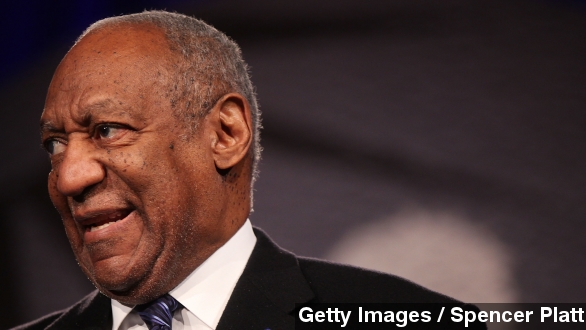 During a show in Canada on Thursday, Bill Cosby seemingly cracked a joke about the sexual assault claims against him.

A woman near the front of the stage got out of her seat, Cosby asked where she was headed and she said the lobby bar. He reportedly replied, "You have to be careful about drinking around me." (Video via CBS / "The Arsenio Hall Show")

The audience's initial gasps quickly turned to laughter, but still, it probably wasn't the best move for the 77-year-old embattled comedian.

What Cosby was referring to is that women have accused him of drugging their drinks and then assaulting them.

And that wasn't the only moment that got people's attention at the show.

TMZ obtained footage of one audience member yelling, "You are a rapist," and another was reportedly ejected for yelling, "We don't love you, Bill."

Cosby managed to calm the audience and continue, but there was a very different scene taking place outside the venue.

Dozens of people gathered outside of the Budweiser Gardens to protest Cosby and the show. Protesters chanted "Shame on you" and handed out slips of paper with the names of Cosby's accusers on them.

Regardless, the show ended with a standing ovation. Cosby later issued a statement, not about the joke but about the outburst during the show. He wrote: "Dear Fans: One outburst but over 2600 loyal, patient and courageous fans enjoyed the most wonderful medicine that exist for human-kind. Laughter. I thank you ... for your continued honor and support. I'm Far From Finished."

The Canadian tour is Cosby's first time back on stage in some time; many of his shows were canceled in recent months. "This was the scene shortly before the lights went down. It's half empty."

Thursday also brought three new allegations against the comedian, each from women who say Cosby drugged and assaulted them.

Friday marks the last show of his quick Canadian tour with a performance in Hamilton, Ontario. There are expected to be protesters outside that venue as well.