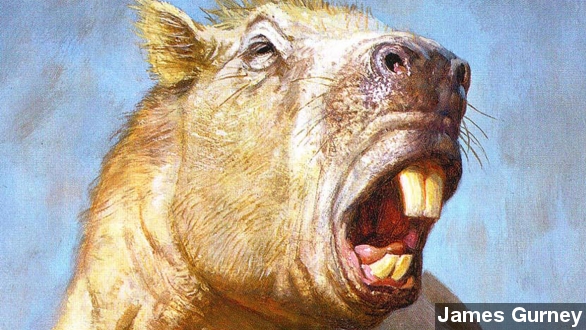 Groundhog Day was this past Monday, and on top of conflicting forecasts on how long the winter will last, it also produced this gem.

But Freund should count his blessings it was Jimmy biting his ear and not Jimmy's giant extinct cousin, Josephoartigasia monesi.

J. monesi is the biggest rodent that we know to have walked the planet, and it would've weighed in at 2,000 pounds — more than an adult grizzly bear.

If you couldn't tell from the picture, J. monesi had a powerful pair of incisors with a bite force of close to 1,400 newtons — on par with bite force measurements of Rottweilers. (Video via National Geographic)

The researchers used CT scans like these from lead researcher Dr. Philip Cox to model J. monesi's bite force. They then concluded the giant rodent probably used those incisors for more than just biting.

Because the incisors could withstand a lot more pressure than the animal's muscles were able to generate, researchers theorize J. monesi could've used its incisors like elephants use their tusks.

For elephants, their tusks are multipurpose tools, used for tasks ranging from digging and stripping bark off trees to fighting with other elephants. (Video via BBC)

And like the elephant, and its giant rodent heir — the capybara — J. monesi would have been a herbivore, using its molars, which could generate even greater bite force, to chew roots. (Video via Discovery)

For his part, Dr. Cox says he is interested in seeing how J. monesi's cranium relates to those of its modern relatives and whether the animal's size would have altered its skull shape, or if it just looks like a scaled-up version of extant rodents.