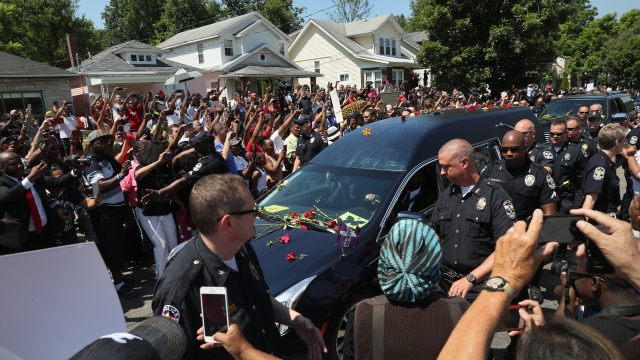 SMS
Big Names Pay Tribute At Muhammad Ali's Memorial Service
By Samantha Crook
By Samantha Crook
June 10, 2016
In Bill Clinton's eulogy he recognized Ali's widow, saying, "I thank you for what you did to make the second half of his life greater than the first."
SHOW TRANSCRIPT

Thousands of people attended a memorial service for Muhammad Ali on Friday in his hometown of Louisville, Kentucky.

In his eulogy for Ali, former President Bill Clinton focused on the latter part of Ali's life and his triumphant spirit even after his Parkinson's diagnosis.

"In the second half of his life, he perfected gifts that we all have. Every single solitary one of us have gifts of mind and heart. It's just that he found a way to release them," Clinton said.

He also recognized Ali's widow, Lonnie Ali, for her role in Ali's life.

"I thank you for what you did to make the second half of his life greater than the first."

Ali died of septic shock at the age of 74.