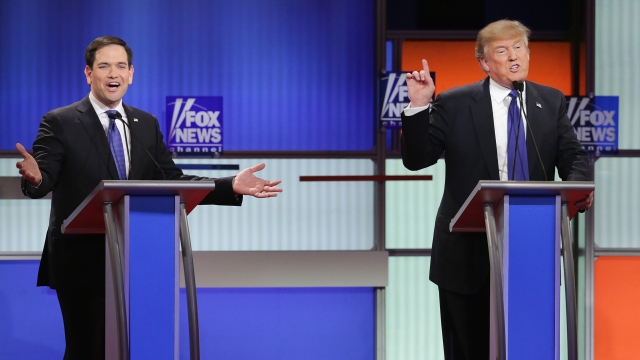 In an effort to unseat GOP front-runner Donald Trump, Marco Rubio has unleashed a volley of personal attacks out on the campaign trail recently.

"I'll admit he's taller than me. He's like 6'2", which is why I don't understand why his hands are the size of someone who's 5'2". … And you know what they say about men with small hands: You can't trust them," Rubio joked at a rally.

But Rubio said at the debate he'd prefer to focus on political issues:

"I would much prefer to have a policy debate. I hope that's what we'll have here tonight."

That didn't last long. After some back-and-forth with the billionaire, Rubio started mocking Trump for some of his past failed business ventures.

Then it just got weird when Rubio and Trump made up insulting nicknames for each other while talking about economic policy.

"Don’t worry about it, Little Marco, I will," Trump said.

This video includes clips from CBS and Fox News and images from Getty Images.