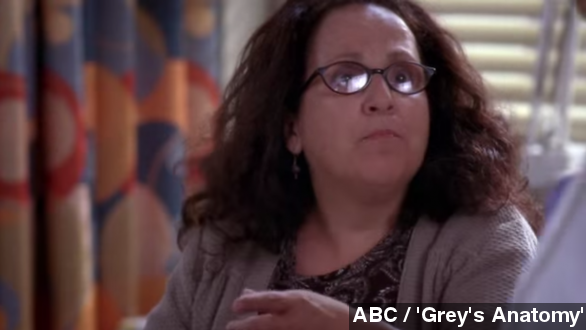 Although best known for her work on the popular sitcom, you won't get far if you're looking to see her face. That's because she played the bodiless yet forceful voice of Howard's mom. (Video via ABC / 'Grey's Anatomy')

MRS. WOLOWITZ VIA CBS / "THE BIG BANG THEORY": "Are you ready for dessert?"

RAJ: "No thank you Mrs. Wolowitz, as it is I'm going to have to carry my stomach out of here like I'm a fireman rescuing an infant."

Once news of her passing broke, friends remembered her on Twitter. Kunal Nayyar, who plays Raj on the show, said "My heart is broken. I will miss your smile. Your spirit is forever with us."

Warner Bros. and the show's producers released a joint statement saying, "Carol Ann was a constant source of joy and kindness to all. Our thoughts and deepest condolences are with her family during this time, and we miss her greatly."

The actress, along with her iconic, nasally Brooklyn accent, is credited with appearing in 75 roles on both the small screen and big screen according to IMDb over the span of about 40 years. Those appearances include stints on Seinfeld and Grey's Anatomy.

Susi is survived by her brother, Michael Susi. She was 62.