Biden Gets Too Close For Comfort ... Again 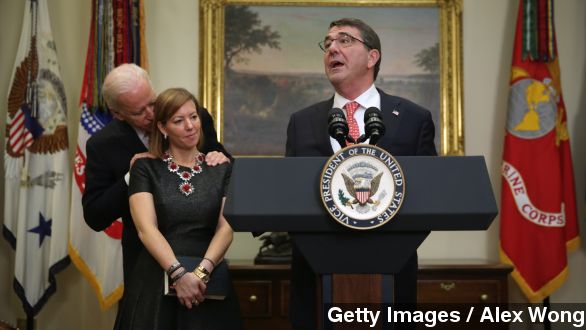 So we're not quite sure what's going on here at Defense Secretary Ashton Carter's swearing-in ceremony. There's Carter's wife, Stephanie, and there's the vice president seemingly whispering a sweet nothing in her ear.

Call it Biden being Biden. Call it creepy. Call it charming. Here's a look at some of his more awkward encounters.

It is perhaps this exchange between Biden and the 13-year-old daughter of Sen. Chris Coons that takes the cake as most cringeworthy. (Video via C-SPAN)

"No, Chris, she doesn’t think the vice president is creepy," Sen. Coons said.

But back to Tuesday's touchy-feely moment. We've got to wonder if Ashton Carter's first order of business as Defense Secretary might be defending his wife from Uncle Joe. (Video via C-SPAN)