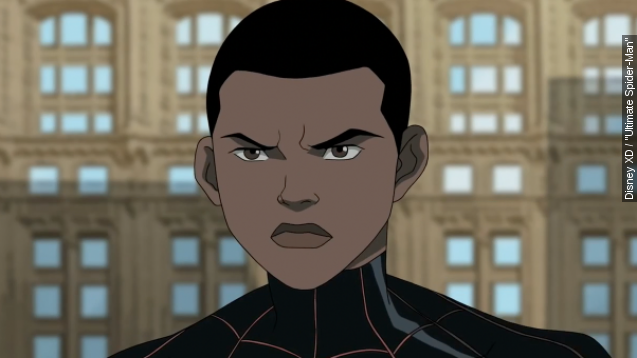 SMS
Biracial Spider-Man To Get New Solo Comic Series
By Ben Lawson
By Ben Lawson
June 21, 2015
Fan favorite Miles Morales will be getting his own solo series in the main Marvel Comics universe this fall.
SHOW TRANSCRIPT

Another Spider-Man is joining the main Marvel comics Universe, and comic readers can likely guess who it is. (Video via Sony Pictures / "The Amazing Spider-Man 2")

Marvel revealed to The New York Daily News Sunday that Miles Morales, the biracial Spider-Man from Marvel's "Ultimate" line of comics, will be getting his own series among Marvel's main titles this fall.

Morales has been a fan favorite since writer Brian Michael Bendis created him in 2011. The news shouldn't come as too much of a surprise to fans, since there was speculation Marvel was planning to put Miles in their main line of comics anyway. (Video via Disney XD / "Ultimate Spider-Man")

But the announcement is coming at a pretty opportune time for Marvel.

On Friday, WikiLeaks published another batch of documents from last year's Sony hack, including Marvel and Sony's 2011 licensing agreement for Spider-Man.

Some people really weren't too keen on Marvel's restrictive rules on who could don the Spidey suit on camera.

So Sunday's announcement comes at the perfect moment to try to satisfy fans, but it doesn't get us any closer to seeing Miles in theaters.

After getting not one but two iterations of Peter Parker in recent years, there was a pretty substantial part of the fanbase arguing that Sony and Marvel should put Miles on the silver screen when the character gets rebooted for a third time.

But the studio confirmed yet another version of Peter Parker will be appearing in "Captain America: Civil War." Tom Holland and Charlie Rowe are rumored to be the front runners for that role. The film is slated to hit theaters in May 2016.