Beyond Ferguson: Municipal Courts Are Still A Problem In Missouri 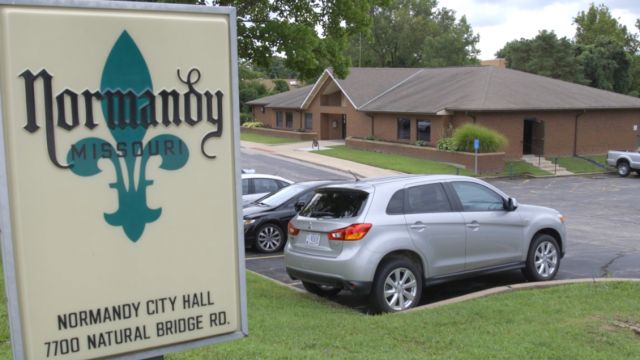 SMS
Beyond Ferguson: Municipal Courts Are Still A Problem In Missouri
By Jamal Andress
By Jamal Andress
August 8, 2016
The DOJ's Ferguson investigation uncovered an abusive city court and ticket-happy police force. But Ferguson is not the only city with that problem.
SHOW TRANSCRIPT

"If you can't make a payment on that ticket, then they hold you ... So while these people are being held, you're changing their entire livelihood for running a stop sign," Pine Lawn Alderwoman Roslyn Brown said.

One of the most interesting findings to come out of the Department of Justice's investigation of the Ferguson Police Department was the overzealous use of traffic violation fines and fees to fund the city government. And when you have court fees making up large portions of city revenue, that can fuel mistrust and resentment between police and the communities they operate in.

"Ferguson is not the only municipality where black people are treated like ATMs to fund municipal functions," former Ferguson Commission member Felicia Pulliam said.

Residents in Normandy have it significantly worse. What you have to understand is when you take people and put them in jail over single speeding tickets, you're not taking hardened criminals off the street — you're more than likely taking poor people away from their jobs and their families.

Especially when you consider how one violation can turn into a pile of debt.

The DOJ investigation on Ferguson, for example, highlighted the case of one woman who, in 2007, parked her car illegally. Once.

"To date, she has paid $550 in fines and fees to the city of Ferguson," former Attorney General Eric Holder said. "She has been arrested twice for having unpaid tickets, and she has spent six days in jail. Yet today, she still inexplicably owes the City of Ferguson $541."

Marius Johnson-Malone, the deputy director of community-based studies for Better Together, explained how much money some cities make from court fines: "You have these communities which are predominantly African-American — much poorer than the average population in St. Louis County — who are going and sometimes having 30, 40, 50 percent in some instances of their revenue as a city coming from municipal court fines and fees. ... Fourteen municipalities had as their largest source of revenue court fines fees. Thirteen of those 14 municipalities were in North St. Louis County, and those municipalities are again predominantly African-American."

The city of Normandy, where roughly a third of city residents live below the poverty line, gets more than 33 percent of its general revenue from court fines and fees.

Normandy Mayor Patrick Green acknowledges that the city made more than $1.5 million from ticketing, but he says that money just subsidizes the budget of the city's 30-member police department. He also said the majority of the tickets written by Normandy police don't go to Normandy residents.

Enter Senate Bill 5 which, among other things, limits how much money St. Louis County cities like Normandy can bring in from traffic violations and use in the city's budget. The bill caps that amount at 12.5 percent. Or at least, it would have.

"It's shameful; we went to the nth degree to file that lawsuit to validate that, which we shouldn't have," Green said.

The lawsuit overturned the law on the grounds that it unfairly targeted St. Louis County municipalities.

Senate Bill 5 capped the amount of revenue cities in Missouri can bring in from tickets at 20 percent of the total, but for cities in St. Louis County specifically, it capped that number at 12.5 percent.

"If you are going to pass a law like this, then it's going to be either 12 percent for everybody or basically 20 percent for everybody — you pick. But you don't do what's been done historically in this country against African-Americans. Pick us out, pick a law only for us or for particular communities," Green said.

The lawsuit has been appealed to the Missouri Supreme Court, where judges will make a decision on whether this legislation is constitutional. Fortunately, the parts of the law that were not overturned in Green's lawsuit help solve other issues that have faced some communities in North St. Louis County. It caps fees for minor traffic violations and prohibits sentencing people to jail for failing to pay those fees.