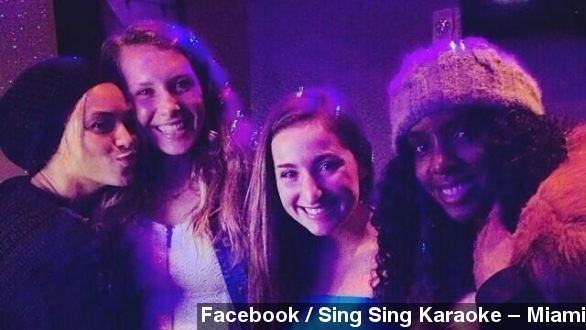 SMS
Beyonce And Kelly Rowland Surprise Patrons, Sing Karaoke
January 9, 2014
Beyonce and Kelly Rowland surprised some women at a Miami karaoke bar and even sang along with them.
SHOW TRANSCRIPT

Karaoke is fun, but how fun would it be if a couple of superstars did a surprise performance while you were at the bar? Yeah, that happened.

As some women were singing one of Beyonce's songs at a karaoke bar in Miami, they were pretty shocked when Beyonce took the mic and had her BFF and Destiny's Child bandmate Kelly Rowland sing backup. (Via NBC)

Sadly, no video of the performance has shown up online, but there are several good photos of the impromptu singalong.

The Miami bar Sing Sing Karaoke posted these pics of the two superstars posing with the lucky women, who were in the middle of singing Beyonce's hit "Party" when Queen B herself and Ms. Rowland joined them. (Via BuzzFeed)

The owner of the bar told the Miami New Times at first the women had no clue who had walked in the room: "And all of a sudden one of the girls looks at Kelly and says, 'Oh, you look like Kelly Rowland,' and then she looks at Beyonce and goes, 'Oh my god!'"

As soon as karaoke patrons realized who was actually in there with them, they quickly busted out the cameras.

But the anchors on KCBS point out they didn't bother to wake up the friend asleep on the couch.

​"Yeah, I wonder if she's still talking to them."

Well, obviously fans are curious to know all the deets! Here's what we've heard so far:

"Did they have a big entourage?"

A few, yes, but they were allegedly a few really big names.

ABC reports Timbaland, Beyonce's hubby, Jay-Z, and her other former bandmate, Michelle Williams were also at the bar with them that night. The group reportedly hung out in the VIP room most of the time.

Guess Blue Ivy stayed with the babysitter. Beyonce and Jay-Z's daughter had actually just turned 2 the night before. (Via E!)