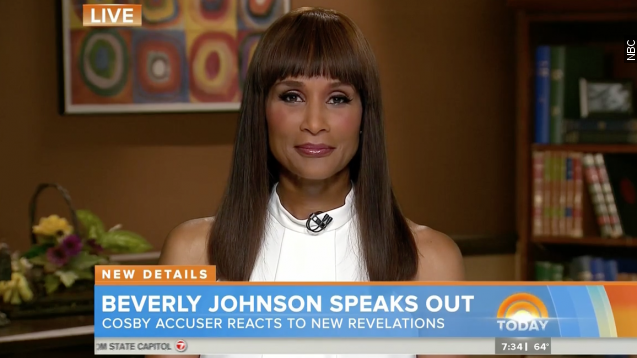 On Wednesday, Beverly Johnson told NBC she wasn't surprised to learn of Bill Cosby's startling deposition. After all, she was one of the first women to come forward about Cosby's behavior. She talked about a time she says Cosby drugged her coffee.

"After the first sip, the room began to spin. I was woozy. I took another sip and it increased from there," she said.

When Johnson realized she had been drugged, she says she got "survival instincts" – yelling and screaming until Cosby backed down.

Johnson says this new information doesn't make her feel vindicated. Instead, it's about women using their voice in these types of situations. (Video via ABC)

"I'm very happy for the victims that they have some sense of peace and validation," she said.

The complete interview is available on NBC's website. Johnson's full story will be included in her upcoming memoir, "The Face That Changed It All."