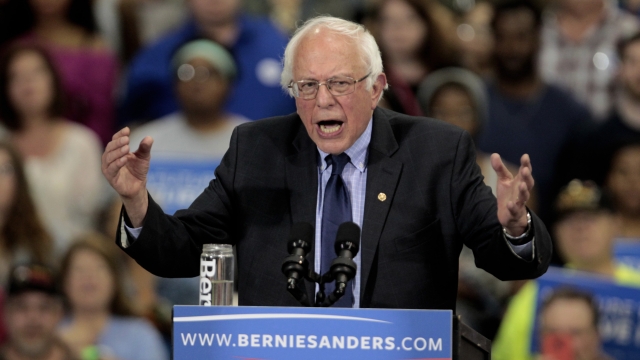 SMS
Bernie Sanders Wins West Virginia But Still Has A Long Way To Go
By Eugene Daniels
By Eugene Daniels
May 10, 2016
The win doesn't do much for Sanders' delegate deficit, but it does give his campaign a morale boost.
SHOW TRANSCRIPT

Sanders was pretty poised to win the state. The West Virginia electorate is more than 93 percent white, which has been one of Sanders' favored demographics so far. And exit polls show the majority of voters want the next president to be more liberal than President Obama.

The win could provide a momentum bump for the Vermont senator, but it's not going to do much for Sanders' delegate deficit behind front-runner Hillary Clinton. West Virginia only had 29 delegates up for grabs Tuesday.

There are now only 11 contests left in the Democratic primary.

This video includes clips from MSNBC, CNN and Bernie 2016.