Bernie Sanders Wants To Be More Than Another Ralph Nader 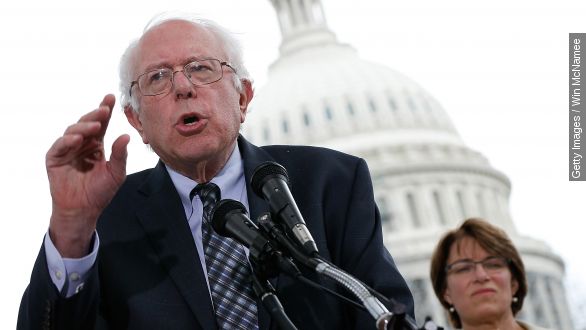 Every presidential race has its fair share of longshot candidates.

“I don’t want to run a futile campaign. If I run, I want to run to win,” Sanders said while at a Brookings Institution event.

Sanders — a self-described socialist whose liberal agenda includes a single-payer health care system and breaking up big banks — has nowhere near the name recognition as the presumptive Democratic nominee.

The senator from Vermont has been compared to other well-known independents who've run for president, like Ross Perot and Ralph Nader. (Video via NBC, Nader For President)

"Are you willing to be the son of Ralph Nader?"

"No, I will not," Sanders said while at a Brookings Institution event.

Of course, Sanders differs from them in a big way. He’s running not as an Independent, but as a Democrat — and that has its advantages.

Even if his campaign is a long shot, that doesn't mean it won't matter.

Giving Clinton a progressive challenger could, if nothing else, pressure Clinton to move to the left on issues like trade and Wall Street reform. (Hillary For America)

Really then, the more apt comparison for Sanders might be Howard Dean — another Vermont politician who appealed to the Democratic Party's Liberal wing back in 2004. (Video via Fox News)

Though Sanders probably wouldn’t be fond of the comparison. Dean himself has already endorsed Clinton.

This video includes images from Getty Images and music by Suplington / CC by NC SA 3.0.