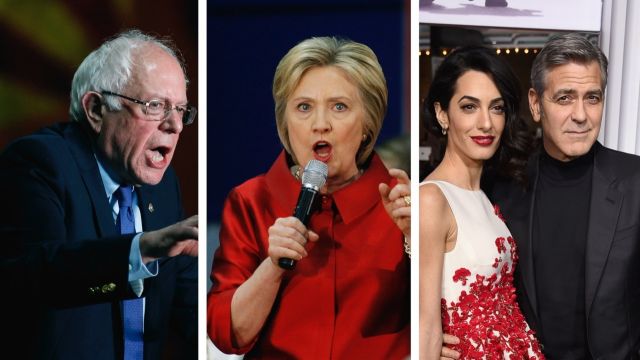 "It is obscene that Secretary Clinton keeps going to big-money people to fund her campaign," Bernie Sanders said in a recent CNN interview.

The event in question is a planned fundraiser between the star couple and Clinton. A pair of seats at the head table are going for as much as $353,400.

Clooney, who's long been rumored to be considering a political run of his own, has been outspoken in his support for Clinton.

"I think the world of her, and I would be very happy if she were president," Clooney told Fusion.

It's a far cry from the kind of fundraising Sanders' campaign takes in — thousands of small-money donations.

His campaign is funded almost 100 percent by campaign donations.

On the other hand, about one-fourth of Clinton's donations have come from super PACs and other groups.

Sanders is coming off a three-state sweep over the weekend, and the two candidates are now turning their attention to Wisconsin's primary. A recent Emerson poll showed Clinton with a 6 percent lead in the state.

This video includes a clip from the International Rescue Committee and images from Getty Images.