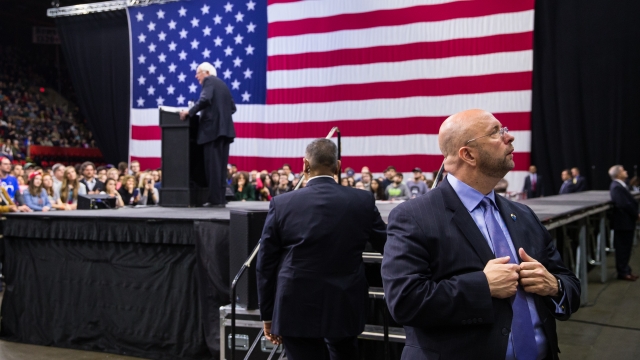 Even though Hillary Clinton has clinched the Democratic presidential nomination, Bernie Sanders has yet to officially end his campaign.

And it's apparently costing taxpayers a good chunk of change.

According to a new report from The Washington Post, a team of Secret Service agents still travels with him wherever he goes and stands guard at his house while he's home.

As you might imagine, it isn't cheap. The outlet reports that type of heavy-duty protection can cost more than $38,000 per day.

And if Sanders refuses to suspend his campaign before the Democratic National Convention in July, taxpayers could be stuck with a pretty hefty security bill.

Still, Sanders' detail certainly came in handy earlier this month. Agents were forced to rush the stage twice in one week to protect him from unruly animal rights protesters.

Many Democrats have called for Sanders to drop out of the race. But in an address to the nation last week, he refused to officially announce the end of his campaign.

"The major political task that together we face in the next five months is to make certain that Donald Trump is defeated and defeated badly. And I personally intend to begin my role in that process in a very short period of time," Sanders said in his address.

When asked by the Post about his Secret Service detail, Sanders' aides didn't dispute that $38,000-a-day figure. But they did claim the cost is a lot lower now than when his campaign first began.

This video includes clips from Bernie 2016, ABC and MSNBC, and images from Getty Images.